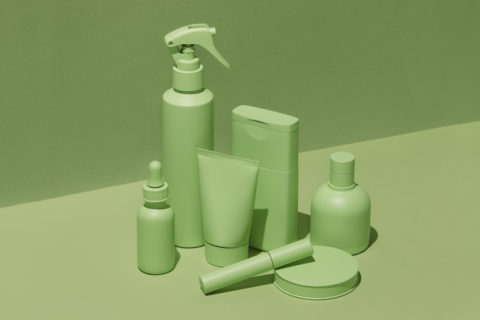 We can’t shop our way to saving the planet, but mindful choices matter.

From ingredient sourcing to sustainable packaging, here’s how the industry’s forward thinkers are striving to tread more lightly as they produce the beauty products you see on the shelves.

The fine print on beauty labels tells us next to nothing about how responsibly sourced ingredients are. To muddy matters, calculating a product’s eco-footprint is far trickier than checking if the formula is all-natural or organic.

For starters, natural ingredients can still cause environmental havoc—take, for instance, palm oil and its derivatives. Widely used in beauty products, they can be found in everything from shampoo to lipstick. They are largely produced in Indonesia and Malaysia, and the destruction of rainforests to clear the way for palm oil plantations is rampant. “A lot of companies are coming in and bulldozing and forcing communities out,” says Lindsay Dahl, senior vice-president of social mission at Beautycounter. Although the brand initially wanted to eschew palm oil, it realized that palm derivatives are still the best choice for many of its products.

As cosmetics ingredients, palm oil derivatives are safe and non-toxic, explains Dahl. Plus, palm oil is the most efficient vegetable oil to grow, so switching to less efficient crops that demand more land could be more environmentally damaging. Beauty companies are therefore working to change how it’s produced: 100 per cent of L’Oréal Paris’s palm oil supply is certified by the non-profit authority Roundtable on Sustainable Palm Oil (RSPO), and Beautycounter is currently pushing for all of its products to be RSPO-certified, too.

But sometimes there’s no way to harvest something in a sustainable way, so rethinking ingredients means taking to the science lab. A 2012 study by the ocean conservation non-profit BLOOM found that the cosmetics industry was the world’s biggest buyer of animal squalane, a moisturizer largely sourced from the livers of endangered sharks. So when Biossance got into the sustainable-skincare game, it opted to bioengineer 100 per cent plant-derived squalane—from renewable sugar cane—instead.

Mixing non-recyclables with recyclables in the blue bin—something waste management experts have dubbed “wish-cycling”—can result in the whole batch getting trashed. Beauty products are extra-tricky: “If you look at a lipstick or a compact, it’s usually made from different kinds of material, and then there’s the size,” says Anthony Rossi, vice-president of global business development at Loop, a TerraCycle company. (Small-format items, generally anything less than eight centimetres by eight centimetres, often can’t be properly sorted.)

Plus, it’s not always obvious what can or can’t be recycled (a PET plastic shampoo bottle is OK but not the cap) and too often leftover goop hasn’t been rinsed off. “When something is contaminated with residual liquid, not only can you not recycle it but it ruins other recyclables,” says Calvin Lakhan, PhD, co-investigator for York University’s Waste Wiki project. A study done for Environment and Climate Change Canada reports that in Canada, we throw away 87 per cent of plastics.

But even if we only recycle what we should, the system is plagued by another problem: plummeting demand. “The big challenge with recycling today is that the cost of crude oil to make virgin plastics is so cheap,” says Rossi. “The incentive for companies to use recycled plastics is diminishing by the day.”

There’s no fast fix to throwaway packaging, but beauty companies of all stripes are making headway. Recently, Unilever switched to 100 per cent recycled-plastic bottles for all three of Dove’s ranges in North America and Europe in an effort to slash its use of virgin plastics. Last year, Beautycounter got rid of 800,000 unnecessary plastic parts—think inner lids and spatulas otherwise doomed to become landfill fodder.

Over at Burt’s Bees, prioritizing post-consumer recycled (PCR) materials has been a longtime goal, with some items now up to 80 per cent PCR content. Through its TerraCycle partnership, the brand also ensures that people have a free way to recycle items that can’t go in a blue bin, like lip balms and mascara.

In the haute-beauty space, Hermès’s answer to disposable consumer culture includes the new Rouge Hermès lipsticks, encased in colour-blocked lacquered, brushed and polished metal. Designed by Pierre Hardy, best known for his shoes and baubles, the plastic-free tubes are refillable keepsake objets—like all luxury items, they’re made to last.

“Reduce, reuse, recycle—it’s not just a catchy phrase,” says Lakhan. “It’s actually the order we’re supposed to do things, but we as consumers and policy planners neglect those first two steps.” Why jettison perfectly functional packaging, for example, when it could be refilled? That’s the question being posed by a growing number of manufacturers and retailers. In Vancouver, The Body Shop’s newly revamped CF Pacific Centre store has refill stations where you can buy your favourite shower gel in replenishable aluminum bottles.

Local indie shops focused on refillables are popping up across Canada, too. BYOC (bring your own container—anything clean will do) to Montreal’s Klova, Calgary’s Canary or Vancouver’s The Soap Dispensary & Kitchen Staples. Offering door-to-door service, Saponetti in Toronto will bring glass Mason jars with made-in-Canada soaps, shampoos and conditioners right to you and take away your empties for reuse.

Similarly, TerraCycle’s circular shopping platform, Loop, is a spin on the milkman delivery model, partnering with some major players in beauty, including P&G and Unilever. (Stateside, you can order Pantene, Love Beauty and Planet and Ren Clean Skincare—the same formulas you know but in containers designed to be refilled again and again.) Loop is slated to launch in the Greater Toronto Area this year with Loblaw; although it’s a pilot for now, it’s one more sign that reinventing our collective attitude to waste is not just urgent but doable.

Ready to make more eco-friendly choices in your life? Sarah Daniels has rounded up three zero-waste shops across the country make it easy to reduce your grooming footprint: 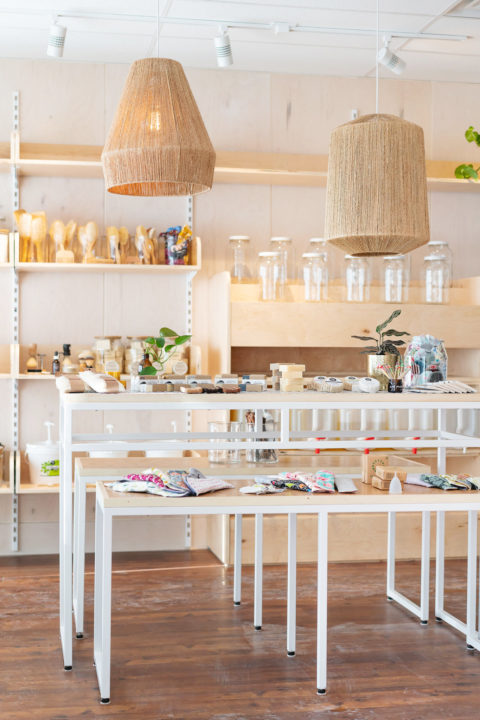 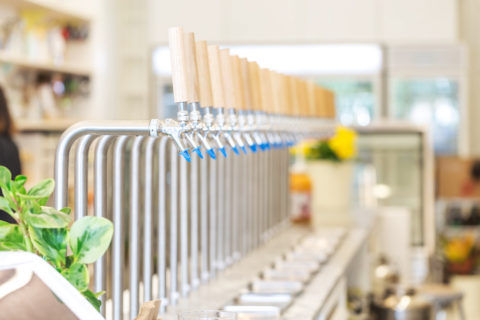 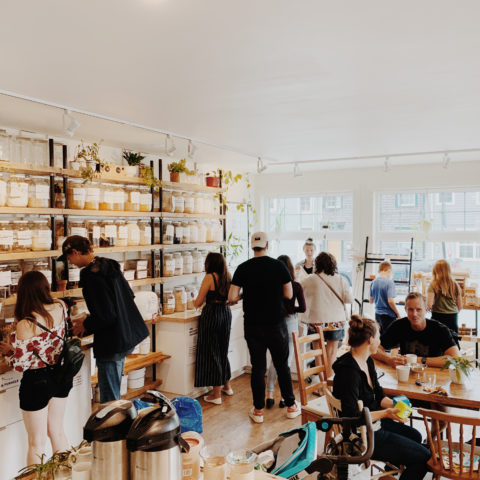 After working for social enterprises and running zero-waste pop-ups across Toronto, Dayna Stein opened a permanent packaging-free shop featuring groceries and lifestyle goods earlier this year. There’s olive oil on tap and a freezer stocked with smoothie-ready kale and blueberries, and everything from mouthwash and muscle rub to blush and dry shampoo is sold in bulk, including colourful French clays that can be used to make custom face masks.

Linh Truong launched her refill shop nearly a decade ago, long before sustainability was trending. “I had never heard of the words ‘zero waste,’” says Truong. “The three rs start with reduce and reuse,” so the idea to operate a store revolving around them just made sense, she says. Alongside pantry staples, household cleaners and grooming products—including Truong’s own private-label line—there’s also a selection of raw materials for those interested in crafting their own soaps and cosmetics.

Eco depression is real. Kate Pepler felt it after completing her environmental science degree at Dalhousie University, where learning about plastic-choked oceans and overflowing landfills was part of the curriculum. The 27-year-old decided to do something about it and opened the city’s first zero-waste store. Stocked with locally made beard balm, shampoo bars and candles, the bulk-goods destination meets coffee shop has become so popular that Pepler plans to open a second location in the future.

Photography via Istock
Get the best of FASHION in your inbox Thanks for signing up!
The latest fashion, beauty and celeb news delivered right to your email #FASHIONforall Now, check your inbox to complete your subscription
We won’t ever use your email address for anything else
Want even more FASHION? Follow us on social media.