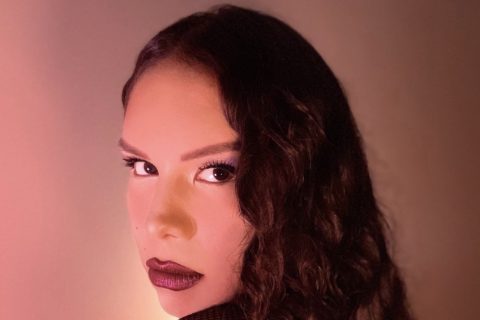 Photograph courtesy of Kiley May
Identity

My Story: Kiley May on Trans Representation in Media and Creating the Character Roles She Wants to See

Welcome to My Story, our weekly series dedicated to creatives of colour and their paths to success. By championing these diverse stories and backgrounds, we hope that our understanding of the cultural conversations around beauty and fashion will expand and that respect for our differences will flourish.

Meet Kiley May, a two-spirit transgender actor and multidisciplinary artist from Six Nations of the Grand River reserve in Ontario. Kiley’s acting CV includes a recurring role in the CBC show Coroner and well as her big-screen debut in the blockbuster horror It: Chapter Two. But Kiley’s love for film and television doesn’t stop at playing characters — she also writes them. Passionate about education, representation and diversity, Kiley is also an emerging screenwriter and filmmaker who’s on a mission to create scripts and roles for Indigenous and transgender women with a focus on positive, empowering portrayals. With support from Netflix and mentorship from Toronto’s ImagineNative Film and Media Arts Festival, the largest Indigenous film and media arts festival, Kiley is currently is the pre-production phase of a short film called Disclosure, which is the first in a trilogy of shorts about the experiences of dating as a two-spirit transgender woman. Here, Kiley shares, in her own words, the motivation behind her film project and how she’d liked to see the transgender narrative change in media.

On growing up, and her journey from childhood to adulthood:

“I grew up on Six Nations reserve, which is near the cities of Hamilton, Brantford and the town of Caledonia in Ontario. I have bittersweet memories of growing up there. It shaped me in a lot of ways, good and bad. I love my community, my family, my people, and I acknowledge that’s where I came from and my roots. I had a lot of great experiences but, because I’m a trans person and because I’m queer, I had a lot of tough experiences, specifically being targeted, being bullied. Six Nations is very much of a small town mentality. When I was a teenager, there was a lot of homophobia and transphobia, which I think is a characteristic of a lot of small towns or rural areas, particularly Indigenous communities that have been impacted by colonization. I feel like bullying is such a coming-of-age experience for a lot of queer people. But speaking for myself, I did experience some violence, bigotry and discrimination, even up until a few years ago as an adult person.

Things have improved tremendously, though. My family has been along on a journey with me. They have grown and become allies, whereas before they had homophobic, transphobic attitudes and beliefs. Now, they celebrate me and I’m seeing a shift in my community — in their consciousness. There’s a lot more people living their truths: living out as queer and trans people on the reserve, which is amazing. Like I said, my community shaped me. It instilled my values and my morals. I grew up following the old, ancient Indigenous traditional ways. I have a real soft spot in my heart for my family and community, but I’m still working through all those layers of what I experienced. I left my reserve in 2007 and moved to Toronto, but acknowledge that both places are my home.”

On identifying as two-spirit:

“That’s a lot to unpack because two-spirit is an ancient identity that pre-dates Canada. I’ve talked to a lot of two-spirit people and I’ve done a lot of my own research digging into the history. What I found is that it’s an identity that exists in a lot of Indigenous communities and nations all across Turtle Island — all across North America — and each community will have their own understanding: their own word in their own language to describe the experience. Their own definition.

This is the simplest way I can sum it up: Being two-spirit is an intersectional identity, which means a person who is Indigenous and LGBTQ. So it is navigating that intersection of those two communities, but it goes so much deeper than that. Historically, two-spirit people were revered and had very sacred, special places in society: roles such as storytellers, artists, warriors and healers. There was a very spiritual, cultural and ceremonial aspect to being two-spirit. But the thing is, not all Indigenous people who are gay or lesbian identify as two-spirit. Some people reject it. I identify as two-spirit because I like the aspect of reclaiming history and reclaiming that ancient reverence and sacredness — the cultural spiritual aspect. I embrace it, but I also identify as queer and transgender.”

On her career path and love for storytelling:

“I’ve carried this love of telling stories and being performative my entire life. I acknowledge that, historically, I come from a people who are storytellers. I come from an oral tradition, so I feel like that’s in me — in my spirit, in my blood. It’s in my ancestral cellular memory. That’s why I left the reserve and went to journalism school at Ryerson University. I wanted to tell my people’s stories. I’ve lived through the ongoing Six Nations Caledonia land dispute and this July marked the 30th anniversary of the Oka Crisis, so I see the importance of speaking up for my people — to be a voice for what we are experiencing. Through journalism school, I realized that I had more of a love for creative writing: I love spoken word poetry. After I finished school, though, I didn’t write for many years until very recently, and began writing for outlets like Vice and Huffington Post. I’m re-entering my writing career. Telling stories feels like my purpose.”

On getting into filmmaking:

“My love of storytelling extends to being a filmmaker and screenwriter. As a trans person, an Indigenous person and an actor, I found myself being very disheartened and frustrated — just fed up — with the representation of Indigenous and trans people not only in film and TV, but in the general media and popular culture. And I’m the type of person to do something about it: I get inspired and motivated by what makes me angry or frustrated and would rather be a solution than just complain about a problem. That pushed me into wanting to be a filmmaker and screenwriter, because I wanted to contribute to more authentic portrayals of my communities and my experiences.”

On her short film trilogy:

“I developed this as a starting off point — to get my feet wet in filmmaking in a sense — with the goal of learning how to screen write, produce and eventually direct. I have long terms goals of doing feature films and TV series. This project explores transgender attraction, desire and love from the perspective of a trans woman. Each short film follows the different stages of a trans woman’s dating experiences, with Part One called Disclosure. The word ‘disclosure’ means to open up, to reveal, to make known, and disclosure is an experience that I have as a trans person: the act of basically coming out or telling someone I’m trans — sometimes for safety reasons. It’s quite an experience and I wanted to create a conversation around it. Disclosure is about a trans woman named Libbie who meets a guy on the street. He approaches her and asks her out on a date, and then Libbie has to decide if, when and how to disclose her transgender status. In the end, he actually discloses something to her too. There’s a lot to unpack with the politics of disclosure. There’s lots of thoughts and feelings around it.”

On her drive behind the project:

“What motivates me to write trans stories is to contribute to more positive, hopeful and authentic characters, because oftentimes when trans women are depicted, it’s through a straight, cis-gender male gaze, and it’s usually really problematic. I did this for myself as an actor, to create opportunities and roles that I love and want to see on the screen but I also did it for my trans sisters. I did it for my trans community to have their romantic comedy moment. To see a trans woman on screen being adored, going on a date and having a kiss in a park. I want to shift the narrative of transgender representation from what historically has been tragic and victimizing to one that’s thriving and about love and happiness. And I hope that the film Disclosure will create a larger conversation about what disclosure actually is and means for trans people, and also for the cis-gender, heterosexual men who are trans attracted. There’s a lot to talk about and I want to normalize transgender attraction and love — crucial topics I feel we never discuss.”

On trans representation in media:

“I feel like I started acting and entered the film industry at the right time because this was during Laverne Cox in Orange is the New Black. She really changed the game. When I think of trans representation before Laverne Cox, there basically wasn’t any. After her, trans representation increased a lot. Things were rapidly improving when I came into the industry. I haven’t experienced big barriers, such as hard rejection, unlike actors five or ten years ago and I’m grateful for that.

What I have experienced, though, is a lack of creativity or opportunities by screenwriters, producers and directors, people who are straight, cis-gender, white men, who don’t really create enough stories or don’t tell good stories. Like, for a while now, casting agents or directors have only really thought of trans performers in a limited sense. They often only see us as trans or queer characters, not as multi-faceted and multi-dimensional performers. Then there’s the terrible history of cis-gender men playing trans women, which is really problematic and a whole other conversation. I would like for people to open up and expand their minds, and to think that queer performers can play anything, which is why I’m hustling and working to get into a position of power — screenwriter, director, producer — to create opportunities. I want to have the right leverage to help shift the narrative.”

Photograph courtesy of Kiley May
Get the best of FASHION in your inbox Thanks for signing up!
You’ll get the latest fashion, beauty and celeb news delivered right to your email Now, check your inbox to complete your subscription
We won’t ever use your email address for anything else
Want even more FASHION? Follow us on social media.