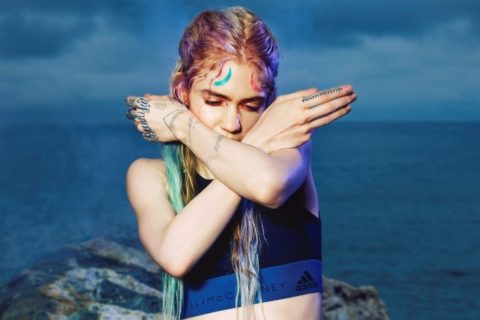 This isn’t your average Top Shelf.

As you may have heard, the Canadian ethereal dark pixie Grimes is the new face of Stella McCartney’s Adidas collection. In the campaign, the 31-year-old musician can be seen scampering over volcanic rocks in workout gear looking like a cross between a yoga influencer and Gollum on his search for the one true ring. It’s all pretty much par for the course, that is, until you read the caption Grimes wrote for her Instagram post promoting the collection.

In the post, Grimes details an alleged wellness/fitness routine that is so truly unhinged it deserves to be dissected in further detail. Supposedly, Grimes maintains a “healthy cellular routine” which involves taking supplements to “maximize the function of [her] mitochondria” and spends multiple hours in a sensory deprivation tank so she can “‘astro-glide’ to other dimensions.” If that wasn’t enough, her preferred form of exercise is sword fighting and after a series of stretches, she engages in a 20 to 25 minute “screaming session” to open up her vocal chords. Perhaps the most deranged aspect of all of this is the “experimental surgery” she allegedly had done to eliminate all of the “blue light” from her field of vision.

ADIDAS: Tell us about ur training regiment ? GRIMES: My training is a 360 approach. I first maintain a healthy cellular routine where I maximize the function of my mitochondria with supplements such as NAD+, Acetyl L-Carnitine, Magnesium, etc. This helps promote ATP and it’s incredibly visceral. From that point I spend 2-4 hours in my deprivation tank, this allows me to “astro-glide” to other dimensions – past, present, and future. In the afternoons I do a 1-2 hour sword fighting session with my trainer, James Lew, we go over the fundamentals that work the obliques, core stabilizes, and triceps as well as a few tricks. To wind down from this I spend 30-45 minutes on an inclined hike at roughly 4-4.5 miles per hour, arguably the most efficient workout. I then spend 45 minutes stretching before heading into the studio where my mind and body are functioning at peak level, with a neuroplastic goal between 57.5 and 71.5 AphC’s (which is my preferred range for my blood type). I’ve outfitted my studio with the highest grade of red light. It is pretty much 1000 sqf IR Sauna. Hana then comes over and we do a screaming session for 20-25 minutes while I slow boil the honey tea that maximizes vocal proficiency. I have also eliminated all blue light from my vision through an experimental surgery that removes the top film of my eyeball and replaces it with an orange ultra-flex polymer that my friend and I made in the lab this past winter as a means to cure seasonal depression. I go to bed with a humidifier on. #asmc #adidasparley #createdwithadidas #gentrifymordor

I’m sorry…what did I just read? Have Grimes’ inherent anime kid tendencies been grossly exacerbated thanks to her proximity to human vampire Elon Musk? Or is it all some sort of elaborate joke? After all, she did hashtag her wellness routine “#gentrifymordor,” which suggests she’s at least somewhat aware of the comedic value of this post.

I’m inclined to think that Grimes knows this is ridiculous and is laughing in a hyperbaric chamber somewhere as one of her multiple assistants cashes that Adidas cheque. But considering she wore a corset and platform goth boots to last year’s Met Gala for her first-ever public appearance with Elon Musk (were we ever so young?) it’s hard to be sure.

grimes and Elon really are a perfect pair pic.twitter.com/NtCnLNrVVI

Please send any and all hot Grimes-related tips to islone@fashionmagazine.com.

P.S. Ask me about the time I tried to sneak into a Grimes concert using the alias Robyn Christmas. Actually, don’t.