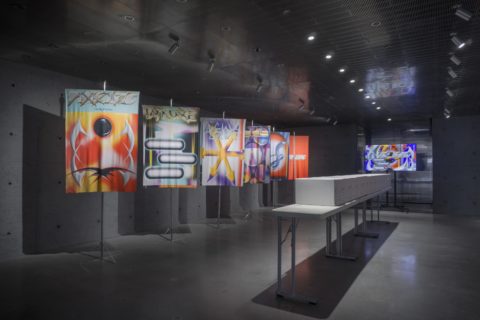 Will Wizardcore Be the Next Niche Aesthetic?

On Thursday morning, a press release flew into my inbox at approximately 9:35am trumpeting the existence of a new exhibition at the SSENSE flagship store in Montreal. “The Big Flat Now” opened earlier this week and consists of a series of 12 flags that are supposedly meant to examine the “frictionless, atemporal dynamics of the world today.” Apparently it’s based on an epiphany SSENSE editor-in-chief Joerg Koch had after a visit to Sterling Ruby’s studio. (Ruby also legendarily inspired Raf Simons when he was creative director at Dior during the F/W 2014, immortalized in the documentary Dior and I).

All of this seems inconspicuous enough, however my jaw hit the floor when I saw what these flags looked like. Created by graphic designer Jonathan Castro, they ascribe to the kind of dorky airbrush aesthetic that heretofore has existed primarily in the fantasy realm. Think airbrushed images of greedy dragons fiendishly hoarding glowing orbs, or nubile women sprouting ram horns out of their heads. (In my head I keep calling it ‘wizardcore.’)  They look like they were designed by whoever creates the covers for those corny fantasy novels sold at drugstores, crossed with Pokemon cards, and a little bit of Guy Fieri flame shirts thrown in for good measure. Which leads me to ask, are the kids in my high school who wore capes and played Dungeons and Dragons during the lunch hour actually the incoming cohort of fashion influencers?

SSENSE tends to be fluent in streetwear, always finding the next thing, which suggests that fantasy and sci-fi nerds might be the next niche subculture to have their interests and aesthetics mined and then commodified for the sake of fashion. It’s already happened to goth/heavy metal fans – remember when Kanye twinned with Lorde in a metal-inspired Vetements sweatshirt? — and now it’s happening to tie-dye hippies; Jonah Hill seems to be looking to the Halloween costume version of Woodstock exclusively to inform his summer 2018 aesthetic.

For some reason, seeing this bright, video game nerd aesthetic reflected on my computer screen simultaneously shocked and exhilarated me. The visuals made everything in my body tingled, like I was waking up to a new consciousness for the first time. It was the exact feeling when you can’t tell if you love something or hate it but you relish the way the squirming discomfort makes you feel.

So, will wizardcore become the next annoying niche aesthetic? Do you love it or hate it? Technically all the evidence I have for advancing this theory is a bunch of weird flags being exhibited at a forward-thinking retail store, but it is entirely possible, I feel this in my bones.

Photography Courtesy of SSENSE
Get the best of FASHION in your inbox Thanks for signing up!
You’ll get the latest fashion, beauty and celeb news delivered right to your email Now, check your inbox to complete your subscription
We won’t ever use your email address for anything else
Want even more FASHION? Follow us on social media.