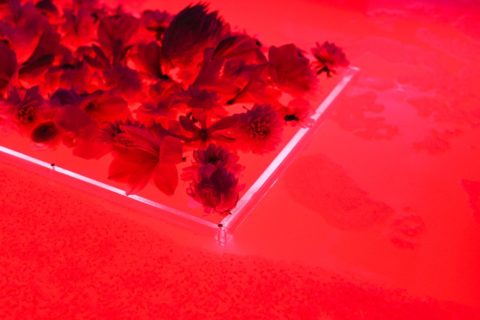 SSENSE’s New Montreal Flagship Store is the Future of Retail

“Anybody can get in and sleep, shop, have sex, play,” says editor-in-chief of SSENSE, Joerg Koch, describing the architectural concept of Fun Palace, conceived by architect Cedric Price in 1964. Though it was never erected, Fun Palace was designed as a flexible leisure space where individuals could come to do whatever they pleased, be it “starting a riot or beginning a painting.” Fun Palace seems to have little in common with a traditional retail store, built for the express purpose of facilitating the sale of goods, but perhaps that’s the point.

While it’s highly unlikely to be hosting any public sex, the philosophy of Fun Palace heavily informs the design of SSENSE’s new Montreal location, which opens its doors May 3rd. Located on rue Saint-Sulpice in old Montreal, a fusty historic façade encases an entirely new brutalist concrete structure designed by architect David Chipperfield. The building serves as a perfect metaphor for the brand. As founder Rami Atallah says, “SSENSE is a lot about the tensions.”

Atallah founded SSENSE in 2003 when he was still an engineering student at Polytechnique Montreal, and turned in the code for an e-commerce site as one of his grad school projects. At the time, Atallah was a burgeoning hypebeast. “I was one of those kids who gets obsessed when there’s a drop, and then they flip,” he says. The entrepreneurial instinct has served him well, as SSENSE has emerged as one of the most prominent luxury e-retailers of the decade.

Atallah describes SSENSE’s mission as “moving culture forward,” which is demonstrated by the brand’s sometimes challenging edit of items from luxury and emerging brands. The DNA of SSENSE is hard to parse – Koch says it’s about celebrating creativity and resisting orthodoxy – but their offerings seem tailor-made to appeal to a small-but-dedicated cult of individuals with deep pockets and a vested interest in esoteric street fashion. Case in point, SSENSE was one of the early champions of Demna Gvasalia and Virgil Abloh, whose almost-satirical approach to fashion was once considered outré but have now been fully embraced by the establishment; Gvasalia as the creative director of Balenciaga and Abloh as the head of men’s design at Louis Vuitton.

Spanning five floors, the retail behemoth includes four floors of change rooms and rotating art installations, as well as a lifestyle café that serves nougat topped with silver foil and a printed matter bookstore filled with crass coffee table books (one example: “Eat Ass, Pray, Love”). Between the mannequins wearing Prada’s S/S 2018 collection and an installation comprised of a pile of discarded electrical cords, the concept of SSENSE Montreal is basically the closest thing Canada has to a Dover Street Market North.

But one crucial feature sets it apart from any other concept store: the utter lack of clothes in the store to peruse. Instead, SSENSE Montreal functions as a glorified fitting room. Customers select the clothing they’d like to try on from the 20,000 items available on the SSENSE website and within an hour, the clothing will be delivered from their warehouse in Montreal’s old garment district to the flagship store with the aid of an industrial vertical lift module. They’ve essentially combined the best parts of online shopping – not having to interact with human beings – with the best part of shopping in-store – trying on an item for size – to create a completely unprecedented shopping experience.

Speaking of unprecedented, the performance artist Arca inaugurated the grand opening of the store with a piece called “Tormenta” that involved him wearing an S&M latex outfit replete with tail, while he writhed against a wire bed frame, locked himself in a cage, and nearly electrocuted himself while tussling around an aquarium filled with pond scum. “That was scary, but I had a lot of fun,” the artist breathed into the mic once the performance was complete.

The next morning, I returned in daylight to find a profound serenity had settled onto the space: no longer a decadent sex bunker, but a calming, minimalist space with Insta-worthy lighting in which I’d be perfectly happy to whittle away an afternoon.

Photography via SSENSE
Get the best of FASHION in your inbox Thanks for signing up!
The latest fashion, beauty and celeb news delivered right to your email #FASHIONforall Now, check your inbox to complete your subscription
We won’t ever use your email address for anything else
Want even more FASHION? Follow us on social media.