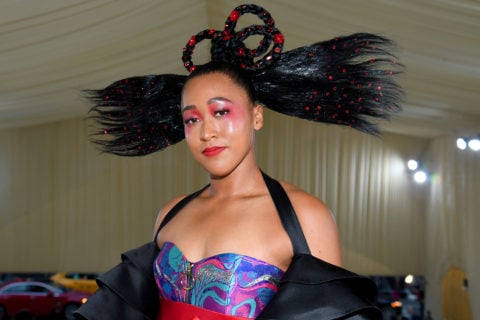 But some aren't buying the pivot from male fantasy to female empowerment.

Tennis champion Naomi Osaka is the newest member of the Victoria’s Secret VS Collective.

The lingerie retailer shared the news on Instagram November 17, writing that the 24-year-old athlete “will join an ever-growing group of trailblazing partners who share a common passion to drive positive change.”

In June 2021, Victoria Secret launched its VS Collective, an initiative made up of figureheads to “influence and shape the future” of the brand.

In an interview with WWD, Naomi Osaka said she was inspired to get involved after learning about the vision for the Victoria’s Secret Collective.

“I remember going into [Victoria’s Secret] stores when I was a kid and wondering why none of the women on the wall looked like me,” she said. “Now, as a collective, we can inspire the next generation from all different backgrounds, cultures and sizes. That represents such progress to me.”

Known for her advocacy of social issues including racial justice and mental health, Naomi Osaka was a “natural choice,” said Janie Schaffer, chief design officer of Victoria’s Secret, per WWD.

The VS Collective represents the company’s drastic rebrand to be more inclusive. Since its inception in 1977, Victoria’s Secret was made to be a “store where men could feel comfortable shopping for lingerie,” The New York Times reports. And up until very recently, its brand imagery and messaging catered to the male gaze above all else.

Along with the lack of diversity in models and sizing options, Victoria’s Secret has been the subject of several controversies over the years. A 2020 investigation by The New York Times found that the company fostered a misogynistic culture of sexism, sizeism and ageism. On top of that, the brand’s former owner, Les Wexner, was found to have had close ties with sex offender Jeffrey Epstein.

Victoria’s Secret’s popularity inevitably dropped in recent years, with shoppers opting for retailers that promoted a more inclusive image of beauty. In June 2021, the company announced an extreme rebrand, doing away with its universally recognized symbol: Victoria’s Secret Angels.

Angels were thin, tall models who would walk Victoria’s Secret runway shows bearing bedazzled feathery wings and sky-high stilettos. What came in place of the angels was the VS Collective, made up of women the brand deems as advocates.

Members of the collective advise the company, appear in ads and promote the brand on Instagram, as reported by The New York Times. According to Martin Waters, CEO of Victoria’s Secret, the company’s newfound mission “is to be the world’s leading advocate for women.”

It’s still unclear whether they’ll be able to fulfill that ambitious goal. Victoria’s Secret’s sharp pivot from male fantasy to female empowerment could be seen as disingenuous. “This Victoria’s Secret rebrand is so annoying,” said fashion writer Hannah Tindle on Twitter. “It could have easily changed itself from what it was to be more in line with the values of 2021 without pretending to be some kind of worthy ‘feminist collective.’”

This Victoria’s Secret rebrand is so annoying. It could have easily changed itself from what it was to be more in line with the values of 2021 without pretending to be some kind of worthy ‘feminist collective’ give me a break lol https://t.co/gJ6Cf1PIWu

By swapping rigid body standards for self-proclaimed female empowerment, the brand is undoubtedly aiming to appeal to shoppers who value social issues. The question remains whether consumers will buy the change in ethos.

Osaka, however, holds optimism for the collaboration. “I wouldn’t have thought this was possible as a child and I’m so glad there’s more representation in the world now,” she wrote on Instagram. “Can’t wait to share/show you guys how I’ll be partnering with [Victoria’s Secret].”

Photo by Kevin Mazur/MG21/Getty Images For The Met Museum/Vogue
Get the best of FASHION in your inbox Thanks for signing up!
The latest fashion, beauty and celeb news delivered right to your email #FASHIONforall Now, check your inbox to complete your subscription
We won’t ever use your email address for anything else
Want even more FASHION? Follow us on social media.