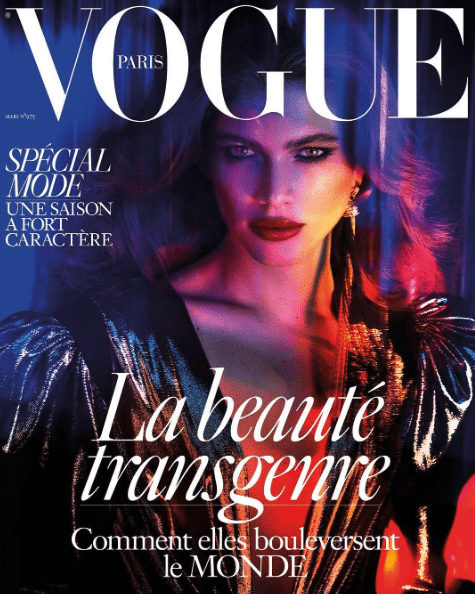 For the first time in 97 years, Vogue Paris featured a transgender model on the front page of the magazine. The March issue has Brazilian model Valentina Sampaio standing in multi-coloured lighting with a metallic dress and bright red lipstick. The cover line reads, “Transgender beauty: How they’re shaking up the world.”

This month we are proud to celebrate transgender beauty and how models like Valentina Sampaio, who is posing for her first ever Vogue cover, are changing the face of fashion and deconstructing prejudice. Valentina Sampaio photographed by Mert Alas & Marcus Piggott, styled by Emmanuelle Alt, with make-up by Isamaya Ffrench and hair by Paul Hanlon. Out February 23rd. @emmanuellealt @valentts @mertalas @macpiggott @isamayaffrench @paulhanlonhair @YSL #emmanuellealt #ValentinaSampaio #MertandMarcus #isamayaffrench #PaulHanlon #SaintLaurent

The magazine has chosen its second-biggest issue of the year to showcase Sampaio as a representation of a celebration of diversity. For American Vogue’s March cover, Ashley Graham posed with Kendall Jenner, Gigi Hadid and others to shatter stereotypes about body image. Now Vogue Paris is ready to take the lead.

French Vogue editor-in-chief Emmanuelle Alt told American Vogue that they have been seeing inequities based on gender presentation. The cover, she says, is about the importance of human rights and the fact that there is still progress to be made on an awful lot of issues.

And an opportunity to be featured on the cover of a magazine undeniably helps build a girl up in the modelling industry. This success provided to Sampaio is especially unique—not just because she’s transgender. For the shot, she’s styled and displayed like any other female they put on their covers, which means she’s not being fetishized because of her gender identity.

“In a post-gendered world which more and more designers are highlighting on their runways, Trans people, the ultimate symbols of a rejection of conformity, are icons that Vogue supports and chooses to celebrate,” Alt added.

“But only when a transgendered person poses on the front cover of a fashion magazine and it is no longer necessary to write an editorial on the subject will we know that the battle is won.”