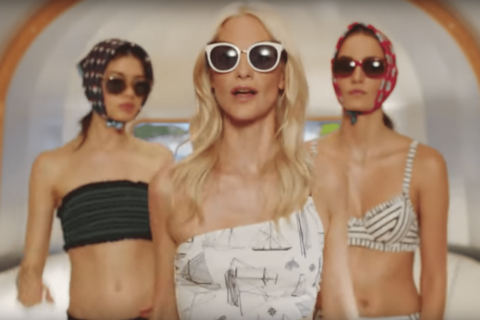 Watch the Tory Burch Ad Being Accused of Cultural Appropration

Uh oh, not this again.

From Gucci’s memes to Dolce and Gabbana’s millennial movement, pulling inspo from Internet trends has become a trend in itself in the fashion world. But these next-generation marketing efforts can be cringe-worthy, and sometimes they can be taken too far.

American designer Tory Burch seems to be learning her lesson the hard way. The brand’s new summer 2017 campaign stars Poppy Delevingne dancing to Zay Hilfigerrr and Zayion McCall’s hit song “Juju on That Beat.” Yes—that song. The viral-meme-turned-Billboard-hit originated in the black community and had aspiring dancers everywhere hitting their elbows to their knees and running on the spot.

Giovanna Engelbert, who directed the video, told Elle Malaysia that her vision for the ad was to make it “playful” and “chic.”

“I wanted the video to be playful and as chic as possible and to put you in a very good mood,” said Giovanna, who directed the video. “Juju on That Beat is a happy song; I like the fact that it is a very easy song, too. The girls learned the moves very quickly and they had fun. The best part was watching them rehearsing and doing the song because they enjoyed themselves for real, which made this whole process very fun.”

Hmmmm. According to Twitter, it seems Engelbert might have missed the mark with this whole “easy song” idea.

i can't believe that tory burch juju on that beat ad is real. how in the world did that get approved

Not sure what #ToryBurch was thinking when deciding to use "Juju On That Beat" in their new ad, but it's a strong NO FOR ME DAWG. pic.twitter.com/QI2sey0Wp2

@toryburch but why? Everything in that advertisement screams cultural appropriation and that little monkey purse chile? I just can't

It feels a little like Tory Burch is capitalizing on a culture craze, without paying credit where it’s due. We hope that Zay Hilfigerrr & Zayion Mccall get a big fat royalty check, despite not being mentioned in the video’s credits.

Teen Vogue has reported that Tory Burch was quick to apologize, saying: “I personally feel badly if this hurt anyone, and I’m truly sorry.” Her comment, however, was deleted shortly after it was posted. It appears that the video has now been removed from the company website.