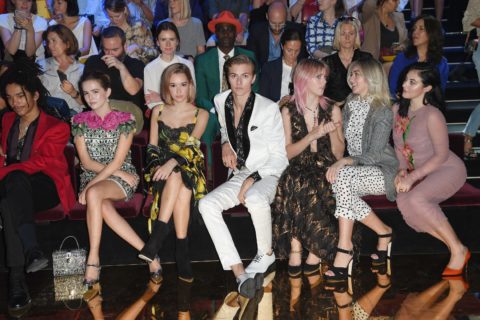 Meet the Millennials Who Owned the Front Row at Dolce & Gabbana

Before the lights went up at the Tropico Italiano-themed show for Dolce & Gabbana’s spring 2017 show, the pre-show conversation between seatmates went a little something like this, “do you know any of those kids? Why is the entire front row full of millennials? Is that Jayden Smith’s girlfriend? Wait, I’m googling this.”

Turns out the relatively unknown front row faces are the kids of celeb parents, new singers on the scene and social media darlings. They included the Smith siblings (Lucky, Daisy, Pyper and Starlie), Rafferty Law, the 19-year-old model son of Jude Law and Sadie Frost, Talita von Furstenberg, the 17-year-old granddaughter of Diane who models and also moonlights on Hillary Clinton’s campaign and Dylan and Brandon Lee, the sons of Pamela Anderson and Tommy Lee. All 21 had their turn in the spotlight as they were brought out one by one and paraded in front of the photographer pit before taking their seats.

On the way out of the venue, the entire street was mobbed with teen girls at the ready with cameras and phones in-hand screaming the names of the boys inside. It’s pretty clear the designers are after the youth vote and it looks like they’re way out front.