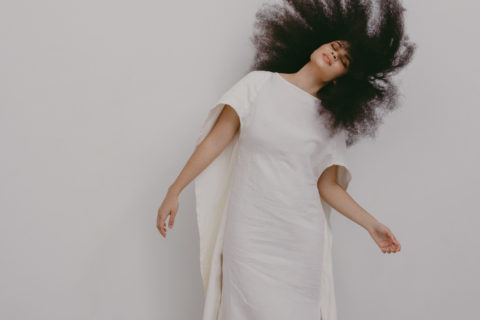 The voluminous pieces also give WFH some glam.

“Everyone’s dreaming about travel,” says Anya Georgijevic, creative director of the newly launched resortwear line, Anushka. Georgijevic is an avid globetrotter who calls Toronto home. And it’s there, pre-pandemic, where she started musing on an approach to a fashion label that spoke to wanderlust and liberation. Bodily, that is.

Comparisons between fashion and interior design have been made throughout the decades; but for Georgijevic, the correlation takes on particular significance since prior to founding her brand, and her years spent as a style and design-focused writer and editor, she studied architecture at the University of British Columbia. Fast forward to years later when she was earning a Master’s of Fashion Studies degree at Ryerson University, where she found herself approaching her class work with an architect’s eye.

“I’d draw garments as a planned view,” she says. “Then I’d cut [them] apart and rearrange things and re-assemble them.” As her design chops developed, Georgijevic gravitated towards creating flamboyantly voluminous garments — pieces that “encase the body differently than a structured garment, yet are very sculptural.” Designs, one can see, that are reminiscent of those worn by Elizabeth Taylor, one of Georgijevic’s style icons, in movies like the much-maligned Boom!.

“She wore some amazing things in that film,” Georgijevic asserts, adding that as an ’80s kid, the decadent glamour of the 1970s — from Bianca Jagger’s ensembles and disco duds, to stylized cinematic offerings like the James Bond franchise — were extremely potent in helping her form a fashion point-of-view (Georgijevic is also the creator of the social media account What Alexis Wore, which catalogues the looks of Dynasty’s most notorious fashionista).

Combining these luxe and free-spirited references with the intention of crafting garments that speak to ease of wear and a go-anywhere attitude, Georgijevic conceived of a variety of ideas for Anushka’s offerings — about 20 designs to start — but has launched with two to begin with. The pieces, which are available for pre-order so as to avoid wastefulness, are produced by a small team in Toronto. They are currently made from one of the more eco-minded materials out there, linen, which is renowned for its durability and low-impact cultivation process (the flax plant that linen is derived from is less resource-intensive than other plants used in textile-making).

The Vera robe dress — which Georgijevic says took influence from her grandmother in both name and design, as it’s based on a dressing gown she used to wear — has a particular of-the-moment appeal given that it intertwines elegant detailing with a sense of self-soothing. But the idea is to eventually wear Anushka’s pieces beyond the confines of one’s home — whenever that is — and feel confident you’ll look wonderful whether poolside, sightseeing or going out to dinner.

“I’d like to encourage a bit more glamour,” Georgijevic notes about her label, referencing its inspiration point of “resortwear with city flair.” And to this end, there’s another consideration in the effortless appeal these pieces possess — one that’s much closer to home for this creative. Georgijevic gave birth to her first child last Spring, and says that she wore mostly kaftans and tunics throughout the Summer.

“As a new mom, it’s nice to have something very simple that you feel polished wearing,” she says of how these chic, amply-proportioned designs would attract busy mothers as well as world travellers. She says that there are many people she’d love to see wearing something from Anushka, calling out Chloë Sevigny in particular. “I’d love to see her wearing one of my pieces while strolling down the beach with her baby.”

With such modern style mavens present in mind during her design process in addition to icons past, Georgijevic says she aims to contemporize sack-like garments and make them appealing to a hip new generation. “I want people to see kaftans in a new light,” she says, referring additionally to why she chose Renata Kaveh — a Toronto-based photographer with a decidedly sensual approach — to capture her inaugural designs. “They ended up looking very alluring,” Georgijevic says. And if travel is just a desire for the foreseeable future, at least we can harness the appeal of freedom with our clothing for now.

Photography by Renata Kaveh
Get the best of FASHION in your inbox Thanks for signing up!
The latest fashion, beauty and celeb news delivered right to your email #FASHIONforall Now, check your inbox to complete your subscription
We won’t ever use your email address for anything else
Want even more FASHION? Follow us on social media.