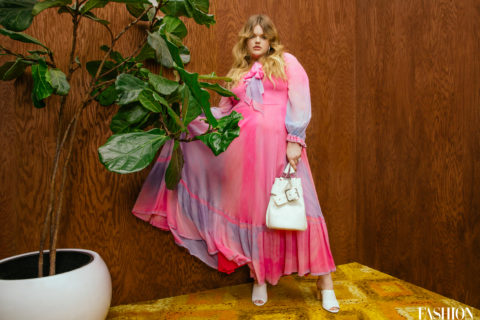 5 Things to Know About Our May Cover Star, Charlie Reynolds

Find out more about the up-and-coming Canadian model.

Charlie Reynolds, the 21-year-old Toronto-based model who graces the cover of our new issue, is a rising star in the fashion world. Read on to find out what she’s watching, where she shops, and her favourite musical theatre shows.

She’s getting crafty over quarantine

Reynolds is passing the time by colouring and trying her hand at jewellery-making; she and her boyfriend have also been watching movies like Isle of Dogs and throwbacks like True Romance and From Dusk Till Dawn.

She used to be a receptionist at Sutherland models

While Reynolds might be a new face in the modelling industry—she’ll soon appear in a Sephora ad, her first major campaign job—she’s certainly no stranger to it. Her mother Carole is the president of Sutherland Models in Toronto, and Charlie once worked there as a receptionist.

Reynolds attended the Etobicoke School of the Arts in high school and went on to study at the Randolph College for the Performing Arts. And her favourite shows? “I’m tied between two,” she says. “Spring Awakening—the Deaf West version is especially beautiful! And Natasha, Pierre & the Great Comet of 1812. Though there will always be a place in my heart for Hamilton and Cabaret, too…”

She’s inspired by other plus models

“I never saw people like me being praised for the beauty of what they were,” Reynolds says about growing up. Now she’s thrilled by the likes of Ashley Graham landing on major magazine covers and Paloma Elsesser walking the Alexander McQueen runway show in Paris earlier this year.

Discovering her love of second-hand clothing while in high school, Reynolds still shops at places like Value Village. She credits her early years spent at ESA for fostering her love of experimenting with style, noting that there were “people who were inspired by the fact that I didn’t care what other people thought and didn’t dress how everyone else dressed. Having that ability to experiment and having the support of being in an art school made me think, I can express myself with this and feel more confident about my body.”