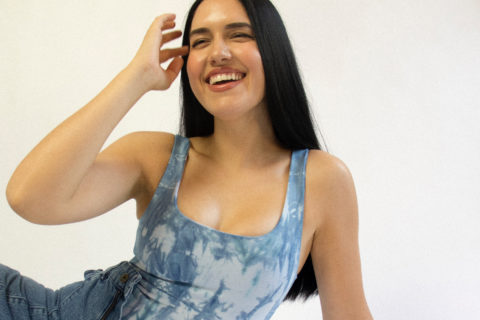 We spoke with designers Kristina Pittam and Liv Tsai to find out more.

Today, Toronto-based brands La Reyna and Tsaichedelic have launched a collection of tie-dye bodysuits with a portion of the proceeds from the sales being donated directly to organizations supporting the Black Lives Matter movement.

The collection fuses the key offerings from both brands in the form of tie-dye bodysuits (available in XS-XL) that are available in three colours. “We’re really excited about how everything turned out,” says Liv Tsai, founder of Tsaichedelic. She and Kristina Pittam, the founder of La Reyna, are friends so teaming up made sense, particularly when they got together and realized they both wanted an opportunity to raise money for an important cause. The pair decided on The Loveland Foundation and Black Women in Motion, with Pittam telling us, “We wanted to focus on an international organization, as well as something close to home within our community. Black Women in Motion is Toronto-based, and we are based in Toronto so we thought it was a really great fit as well.”

The idea of raising money for donations via a collection is the premise upon which Tsai’s business was started. Earlier this year, she lost her full-time job and decided to launch Tsaichedelic as a way of being able to raise money for frontline workers during the pandemic. Since then, she has been incredibly encouraged by the generosity of her community and their willingness to help in whatever way they can. “Some people gave me $5, $10 more, I even had someone who doubled the price so I could donate more. It’s great to see everyone coming together for these causes. We all have platforms – everyone has the ability to [make an] impact.” She adds, “One idea that one person has can stem into so many other ideas and I think that’s why Kristina and I think this so important because not only are we able to give back but we’re able to inspire others to do the same. Plus, we’re able to connect with more people in our communities.”

Connecting with her community during COVID also brought about a product pivot for Pittam at La Reyna. “It happened by accident with the launch of our upcycled scrunchies in mid-March,” she explains. “When we launched the scrunchies, they sold out immediately and we couldn’t keep up with demand, so this showed us that people wanted to buy into our brand, they just needed to have something a product available that they have the means to purchase, especially during this time. So that gave us the idea to create products that were a bit more affordable in between the price of our bodysuits and our scrunchies and something that they could afford to tap into at this time.” A line of tops has followed as a result, with three more collections dropping the coming months.

Ultimately, both Tsai and Pittam want to do good and make people feel good. “We hope we can bring people a bit of happiness during this time,” says Tsai. “It’s more than just tie-dye bodysuits for us.”

The collaboration is now available online.