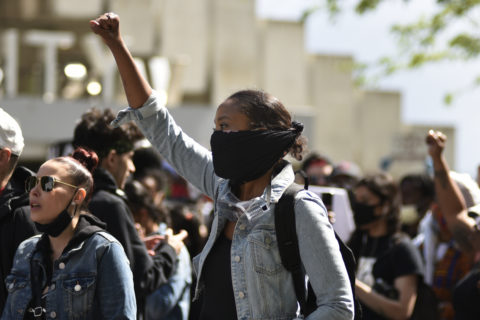 If you're a non-Black person who has never fully engaged with the reality of systemic racism due to your own privilege, it's on you to educate yourself.

The past week has been a heavy one. The reality of anti-Black racism in the US, Canada and around the world is no secret. But over the last several days, the outrage over repeated and systemic violence against Black people reached a boiling point, fuelled by a recent spate of police brutality. In response, white people and other non-Black folk around the world are taking it upon themselves—finally—to educate themselves to be better allies, to unlearn generations of internalized racism, and to attempt to become the anti-racist citizens the world needs in order to have a chance at lasting change.

The past week may have been a wake-up call for some but the truth is, nothing about this is new. This is what Black communities have been living with for centuries. As Roxane Gay writes in a recent op-ed for the New York Times, about the post-pandemic status quo people are hoping to return to: “The rest of the world yearns to get back to normal. For Black people, normal is the very thing from which we yearn to be free.”

If you’re a non-Black person who has never fully engaged with the reality of systemic racism due to your own privilege, it’s on you to educate yourself. Read on for a list of films, television shows, books, social media accounts and other resources to turn to in the coming weeks, months and years to understand better the history of anti-Black racism.

I got to spend time with my WHEN THEY SEE US family yesterday and every minute was a joy. Netflix screened our film and we had a beautiful talk afterward moderated by my dear friend JJ. Then, our brilliant composer Kris played his piano live with images from the film projected above him. Magnificent. And my stellar teammates from @arraynow were in the house for it all – which made it even better. Earlier in the day, we were honored with four awards by @aafca. It was one of those days that at the end of it, you just smile, basking in the light of friends and loved ones. Hugs to all. xo Styling: @jasonbolden @starburleigh Makeup: @adamburrell Hair: @ladysoulfly

Sneak preview of the paperback cover of #girlwomanother! Published 5 March 2020. In case you're wondering, the hardback cover design was too subtle to stand out in the smaller pbk size. I was staggered to discover this week that the novel was the 12th bestseller for hardback fiction in the UK for 2019, and only one of two books on the list that are not 'mass market big-hitters' (Lee Child, John Grisham, Sophie Kinsella, Stephen King, JoJo Moyes, Le Carre, etc) – although all bestsellers become just that. So – the surreality of Being Bookered (and Baracked) continues. My work is reaching readers who wouldn't normally encounter it or want to read it. Barriers are coming down and my 12 womxn are flying off into a life of their own. #ase #grateful #bookstagram #books #penguinbooks #bookclubofinstagram #booklover #bernardineevaristo

A post shared by Bernardine Evaristo (@bernardineevaristowriter) on Jan 10, 2020 at 2:19am PST

Swipe for resources. • Racial justice is a feminist issue and the deep disparity in how white women showed up for “all women” at the women’s march but haven’t showed up in the millions for the current uprising speaks to the @harpersbazaarus article I wrote back in 2018 titled “When Feminism Is White Supremacy In Heels” • My work has always been done through the intersected lens of race and womanhood. You can find more resources from me on this topic in my bio including the link to my article and the link to my recorded lecture Unpacking White Feminism. • White women I am demanding you tap into the radical empathy I mentioned in my public address yesterday. Move past “I’m so sorry this is happening to you” and ask yourself “how do I play into the pain the black community is doing and how do I hold myself and my community accountable for enacting justice?” Ask yourself what moved you to show up on the streets in 2017 but isn’t lighting a fire in you in this very moment. • Do you hear me? Drop a comment/emoji and tag who needs to hear this • #revolutionnow #manifest #racism #blm #soul #spirit #yoga #crystals #essentialoils #goodvibes #goddess #yoga #retreat #yogaretreat #seattle #nyc #la #marieforleo #gabriellebernstein #spiritual #success #lifecoach #bookclub #nyc #lululemon #doterra #wanderlust #teachersofinstagram #dogsofinstagram #catsofinstagram

May 28, 2020 STATEMENT ON THE DEATH OF REGIS FROM THE KORCHINSKI-PAQUET FAMILY On Wednesday May 27, 2020 at approximately 5pm a 911 call was made by a concerned mother Claudette Beals-Clayton, for the safety and well-being of her child Regis Korchinski-Paquet. Regis was in distress over a family conflict and her mother sought police assistance to bring calm to the situation. Once police arrived at the residence they met Claudette her mother, Regis and Reece Korchinski-Beals, her brother in the hallway of 100 High Park in Toronto. Claudette pleaded with police to provide assistance to her daughter and take her to CAMH to provide mental health support, as Claudette did not want the problem to escalate where it became unsafe. Words were exchanged between Regis and the police officers, and Regis stated she had to use the bathroom and went into her apartment. Her brother who was present, witnessed multiple police officers enter the unit after Regis went in. When her brother attempted to go in after his sister he was stopped by police from entering the unit. After approximately 1-2 minutes the Mother and the brother heard commotion in the apartment and then heard Regis cry out “Mom help, Mom help, Mom help”. After that Mother and Brother heard silence. Eventually an officer came out of the unit, knocked on the neighbour’s door, and stated to the family that she is over at the neighbour’s house or in the unit below. After a few moments the mother then asked the officers if she is on the ground. An officer went into the unit, then came back out and told her mother yes she is on the ground. The family is distraught over the senseless loss of life and wants Justice for Regis. The family wants answers to what happened. How can a call for assistance turn into a loss of life. The family wants to ensure camera footage from hallway is secured by the SIU. The family is extremely concerned that in recent times people with mental health issues across North America are ending up dead after interactions with the police.