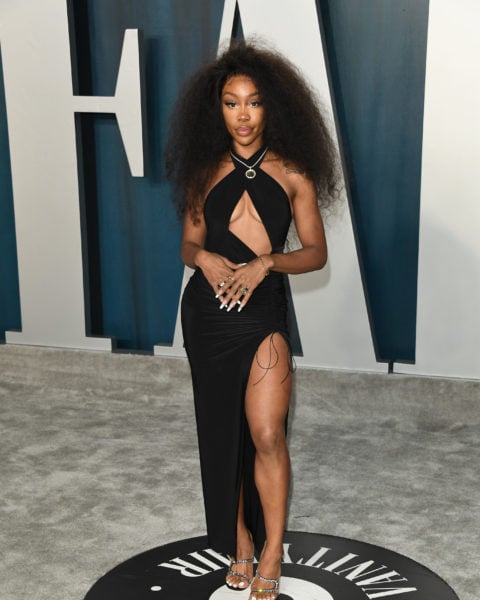 SZA’s Best Looks Throughout The Years

From "fairycore" to elevated streetwear, SZA's outfits are — and always have been — in a league of their own.

Happy birthday to the Scorpio songwriter whose jazzy vocals and vulnerable lyrics put us in our feelings every time. Obviously, we’re talking about SZA.

Since the release of her universally-acclaimed album CTRL in 2017, the artist has been in the spotlight sporting individualistic ensembles and mixed aesthetics, from ethereal dresses to edgy streetwear. Known for her alternative R&B sound, SZA is one of the most beloved artists of our time. Her style, much like her music, exudes effortless allure.

Since she began making music in the early 2010s, SZA’s style has always been in its own league. In light of her birthday, here’s a rundown of some of our favourite looks donned by the St. Louis-born star.

Head-to-toe in black and white, SZA added some fun to the look by mixing different patterns. The baggy button-up top paired with the relaxed shorts is indicative of this era in the singer’s career, where looser silhouettes were her preference.

For the prestigious awards show, SZA opted for a floral cut-out halter dress with platform silver heels. Simply put, it was a serve.

After the release of CTRL in 2017, the singer received mainstream praise as an experimental R&B genius. At this time, SZA’s style reflected the transformation. She began to sport edgy yet sexy takes on her preferred streetwear aesthetic. Often mixing baggy pants with bras and pairing oversized jackets with mesh tops, this era represents the beginning of a shift in her style.

Can we get a round of applause for this look? SZA effortlessly graced the Soul Train Awards red carpet in an off-white cutout top, baggy trousers and a duster jacket.

The 2018 Met Gala theme was “Heavenly Bodies: Fashion and the Catholic Imagination” and needless to say, SZA understood the assignment. In an ethereal Versace frock with a gold headpiece adorned in stars, the singer quite literally resembled an angel.

In a Vivienne Westwood gown with frayed edges and a perfectly messy updo, SZA brought edgy couture to the 2019 Oscar Red Carpet.

Embodying chic elegance, the singer stunned in a cutout black halter dress with a thigh-high slit.

In March 2021, SZA dropped the music video for her viral single, “Good Days,” which quickly became a quarantine anthem. An uplifting ode to reminiscing about better days, the song coincided with springtime and new beginnings. In the music video, we see SZA sporting a variety of looks, including a red tie-dye bra top paired with low-waisted textured pants that gave off forest fairy vibes. (Honourable mention to the diamond chain dress she’s also seen wearing.)

SZA tapped into the coveted cut-out trend for the Billboard Music Awards Red Carpet in this slinky all-black Mônot look. Later in the evening, she performed “Kiss Me More” with Doja Cat, sporting yellow hair and a two-piece black set.

Since COVID shut down in-person events, SZA has graced our feeds time and time again with IG photo dumps where she shares snippets of her OOTDS and makeup looks, forever showing off her unmatched cool-girl aura.