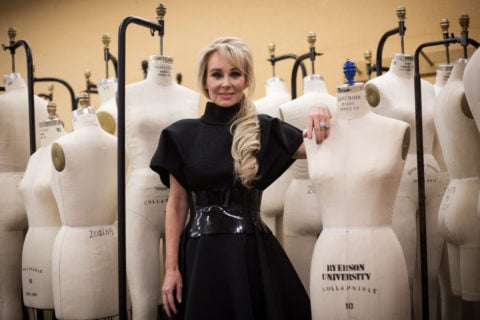 Suzanne Rogers Will Not Attend This Year’s CAFA Awards Event

Members of the Canadian fashion community reacted with condemnations to Rogers posing for a photo with former U.S. President Donald Trump, citing his lack of support for BIPOC and LGBTQ+ people.

Vicky Milner, President of the Canadian Arts and Fashion Awards, announced late this afternoon that Suzanne Rogers will not attend this year’s CAFA Awards event. Rogers has been front and centre of every CAFA Awards since the event began in 2014. Here is the text of the email Milner sent out around 5:30 pm:

We are so proud to celebrate and honour Canadian fashion’s great creatives virtually at the upcoming Awards on Wednesday, May 19, 2021.

A first for CAFA, the digital format democratizes the Gala while acknowledging our homegrown talent. This year has undoubtedly seen its share of challenges and hardships, but it has also taught us that we are stronger when we stand united.

CAFA’s aim has always been and continues to be to honour outstanding achievement and emerging talent in the Canadian fashion industry. Diversity and inclusion have always been a part of CAFA’s core values as is the goal of growing a stronger appreciation of Canadian talent both at home and abroad.

We want to ensure that CAFA’s focus is about celebration and shining a light on our amazing talent.  As such, CAFA has made the decision to defer The Suzanne Rogers Designer Grant Award and Suzanne Rogers will not be attending this year’s Gala.

We sincerely thank you for your continued support and hope you will be able to join us to celebrate Canada’s most fashionable night!

The article below was originally published on May 2, 2021 and provides the context for CAFA’s decision:

On the morning of Saturday, May 1, Suzanne Rogers posted an Instagram Story posing with former U.S. President Donald Trump at his private club, Mar-a-Lago, in Palm Beach, Fla. Given that Rogers has positioned herself as the fairy godmother of Canadian fashion, members of that community reacted immediately with condemnations, citing Trump’s lack of support for BIPOC and LGBTQ+ people. In 2016, a $1 million donation from The Suzanne and Edward Rogers Foundation established the Suzanne Rogers Fashion Institute at Ryerson University to support emerging designers. Last November, the Foundation provided another gift of $1 million to the SRFI. But Rogers’ post seems to have trumped, so to speak, her previous financial goodwill.

Suzanne Rogers, her husband Edward and two sons dined at Mar-a-Lago on Friday and posed for a photo with Trump at the end of the evening. Rogers posted the photo with the caption, “A Special Way to End the Night!” By midday Saturday, after outrage began circulating online, Rogers took down the post.

Toronto designer Michael Zoffranieri was one of the first to express his dismay on social media, by reposting Rogers’ post, adding the caption, “Will Canadian fashion accept this?”

Phones began buzzing all over the city with members of the fashion community voicing their disapproval on social media and encouraging others to do the same. The Ryerson School of Fashion also posted a statement inviting “Suzanne Rogers to enter into a dialogue with our faculty, staff and students to discuss the impact that Trump and his community has had on further harming members of the fashion industry who are low income, Black, brown, Asian, disabled, Indigenous, trans, queer, and/or part of other systemically marginalized communities.”

The post was later removed and replaced with a message from Ryerson University which includes the following: “We do not believe social media is the appropriate platform to judge the actions of others.” It also goes on to say, “We will be respectful of differing viewpoints,” which did little to quell the ire, especially among those associated with the Ryerson School of Fashion.

Ben Barry, the Ryerson School of Fashion’s Chair and Associate Professor of Equity, Diversity and Inclusion, shot back on Instagram Stories with a message that the Ryerson University statement “are Ryerson’s words not mine or our school,” referring to the School of Fashion.

Various observers began questioning the integrity of Ryerson University, and whether they are motivated by the Rogers family’s deep financial contributions to the school, including the Ted Rogers School of Management.

On Sunday, Toronto lawyer Anjli Patel, who teaches a fashion law course at Ryerson, wrote a three-part letter to Mohamed Lachemi, president of Ryerson University, and posted it on her Instagram account, @anjlitoronto. It notes that the School of Fashion’s guiding principles are inclusion, decolonization and sustainability. She encourages others to write to the head of the school as well.

On Tuesday, May 4, Rogers posted a statement on her Instagram account. “I have always believed in equality, diversity, inclusiveness, and respect for all,” the statement begins. “The Suzanne Rogers Fashion Institute, at Ryerson University, is a true reflection of diversity in Canadian fashion.”

The second paragraph of Rogers’ Instagram statement goes on to address the Donald Trump photo in question, saying that she has no relationship with the former president, “good or otherwise,” and that she had never met him before that night. “No political statement, on any policy, was intended by the photograph. Taking and posting it was done with any considering the false assumptions and implications that would be made about my personal beliefs. I regret that my actions caused anyone to question my values or commitment to the communities and causes my family and I hold so dear,” she writes. Noticeably absent from the statement is acknowledgement that calling an encounter with Trump, however brief, “special” would be hurtful and concerning to said communities.

At the time of this publication, comments on the post were disabled.