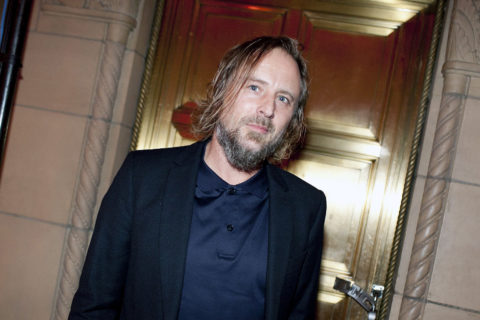 Kenzo’s creative directors step down from the brand, a museum exhibition dedicated to Olivier Theyskens opens and more.

Sterling Ruby, the multidisciplinary artist known for his paint-splattered canvases and dedication to American folk art, has launched a fashion label. Titled S.R. STUDIO. LA. CA., the line features a plethora of distressed clothing — bleach splatters, acid wash and paint sports — that draws direct influence from the artistic practice he has maintained for the past 20 years. The collection begins at $530 for a t-shirt and is available online on SSENSE. (“Being editorial driven, SSENSE goes beyond being a simple retailer, giving customers content that explores what fashion means on a personal and cultural level. The opportunity to be featured in this context made SSENSE the perfect launch partner for S.R. STUDIO. LA. CA.,” says Sterling Ruby.) This is hardly Ruby’s first fashion rodeo, however. The 47-year-old has regularly collaborated with Raf Simons since 2012, when the then-creative director of Dior asked the artist to modify one of his painting for use on silk fabric. The S.R. STUDIO. LA. CA. collection debuted earlier this week in Milan. Ruby described the medium of a fashion show to the Financial Times as “such an impactful five to 10 to 15 minutes of bodies and space and form and flow and speed and sound of rhythm.” (Press Release)

For the past few months, Carine Roitfeld has been trying her hand at new ventures. In February, she announced she would be stepping back from the magazine she founded, CR Fashion Book, to focus on her branding agency, and shortly after was named a style advisor at the Karl Lagerfeld brand. Her latest venture outside of print media was a runway show at Pitti Uomo described as a “major fashion extravaganza” by WWD. The 102-look show, which included top models such as Bella Hadid, Doutzen Kroes and Alek Wek, included a selection of new and vintage pieces currently on offer at e-commerce site LuisaViaRoma. After the dazzling affair, Lenny Kravitz treated the 4,000 guests to an open-air concert, where he performed “Fly Away” and “American Woman.” (Unfortunately, his dick did not fly out of his pants.) If you can’t get enough of Carine, go read our 2014 profile of the famous editrix by Sarah Nicole Prickett. (WWD)

Since 2011, Humberto Leon and Carole Lim have imbued Kenzo with a distinctive juvenile-yet-elevated aesthetic. Through tiger embroidered sweatshirts, they managed to transform the almost 50-year-old label into a thriving contemporary brand. Now, according to WWD, the pair are set to exit on July 1stin order to re-focus on running the Opening Ceremony retail business and in-house label. “Humberto and Carol consistently brought diversity and inclusion to the forefront at Kenzo, using their collections, fashion shows, advertising, and special projects to engage and galvanize a new generation of creative,” said Sylvie Colin, chief executive officer of Kenzo since 2017, in a statement. Their final collection for the brand will be presented on June 23rdduring Paris Men’s Fashion Week. Truly the end of an era. (WWD)

Against a summer backdrop of dream-like flowers, @justinasvilutis shoots these bright colour block mules from the #KENZOSS19 collection. Mixing a chunky vivid heel with tubular patent leather straps for a contemporary yet youthful vibe.

It seems like the current hunger for fashion-related museum exhibitions has not abated. Hot off the heels of the opening of Camp: Notes on Fashion at the Metropolitan Museum of Art, former Rochas and Nina Ricci designer Olivier Theyskens is the subject of a new fashion exhibition at the Calais Lace Museum in Calais, France. “In Praesentia,” a moody, gothic exhibition tracking the designer’s complicated relationship with lace, opens this Saturday. “When I first started at Rochas in 2002, almost right away I got obsessed with re-creating the house’s own lace, a black Chantilly on a coloured background Marcel Rochas often used on his dresses,” Theyskens told WWD. “Olivier had already done a retrospective on his work, so here we wanted to do something different,” museum curator Lydia Kamitsis told WWD. The exhibition primarily focuses on the material history of lace, presented in an unusual environment: the lighting is so dim visitors require torches in order to read the captions. The fascinating-seeming exhibition runs until January 5th, 2010. (WWD)

Photo by Lexie Moreland/WWD/Shutterstock
Trends, beauty secrets, culture & more
Yours for only $1 an issue
Subscribe now!