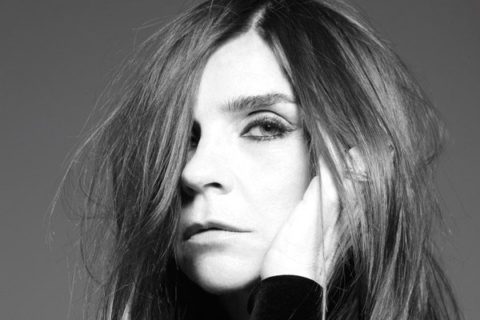 Somewhere between doing what I could and doing what I wanted, the last line of Jonathan Franzen’s 2001 novel The Corrections became one of my favourite mantras: “She was seventy-five,” it goes, “and she was going to make some changes in her life.” The “she” here is Enid, a wife, mother and grandmother whose husband has just passed away, and who steps out of the hospital into a green spring night. It’s a sweet ending. It is also a real thesis, and few embody it better than public editrix number one, the Parisian expat and pushing-60 sex symbol Carine Roitfeld.

In February 2001, Roitfeld took the reins at Vogue Paris. After 10 years, a hundred wickedly “erotic-chic” issues and many, many angry calls to Condé Nast from duly offended citizens, she left—abruptly, amid a thicket of rumours. “I don’t want to get old in this golden cage,” she told The New York Times’ Cathy Horyn. Because her tenure at Vogue had shot her to the kind of icon status it takes most icons a lifetime to achieve, and because the attendant pressures had somehow left her forehead as cleanly unlined as her pencil skirts, it was easy to forget that Roitfeld was then 56 (she’s just five years younger than Anna Wintour). Post-Vogue, she promptly collaborated with M.A.C and posed with her family and friends in a Barneys campaign called “Carine’s World.” Then, moving to New York, she started her own ultra-culty magazine, CR Fashion Book, with offices in the Standard Hotel East Village. In other words, she did everything a thoroughly millennial It girl would do, except she was—is—a mid-career mother of two.

In March 2012, I also moved to New York, a city that ages you like a death in the family, then launched an independent literary and erotic magazine called Adult, and suddenly I feel older than my 28 years. I yearn for the secret of agelessness. For Roitfeld, it seems to be a flippant resistance to nostalgia. “I never go to the [Vogue] archive,” Roitfeld told the Berlin biannual 032c in 2005. “I never look back. I’m a very visual person, and I think before, maybe the magazine had some very good things, but the pictures were just not good enough. I don’t think I have a big ego, but I really do have ideals.” Her main ideal—a rabid, glammy animus conveyed in hard-femme clothes (or lack thereof) and countervailed by disarming winks or nods to bourgeois codes—would seem a deliberate contrast to the genteel and erudite aims of her predecessor, American writer Joan Juliet Buck.

In nearly every interview she’s done since 2001, Roitfeld has been asked, although not in these words, why her images are so damn unladylike—or, worse, unfeminist. And she always insists she means to push, not shock. “I’ve never shown a woman where she seemed not tough,” she told The New York Observer last September. “When I do bondage, the woman looks strong. She doesn’t look like a poor, miserable person.” A year earlier, Roitfeld told The Guardian that she’d begun wearing stilettos not to seduce, but to stand eye-level with the (very tall) photographer Mario Testino. Sounds feminist enough to me.

Indeed, it was with Testino that she began to scale the height of her devastating powers. From age 21 to 36—the 15 years we’re told are most crucial to our careers—she had more or less idled, working on pretty and forgettable images. But when Roitfeld and Testino met in 1990, the time was ripe for a new kind of woman. Manhattan’s shoulder-padded “working girl” was out. In Roitfeld’s dreams, the real threat to the social order was either a deranged housewife or her dirty-but-OCD maid. Shooting with Testino for The Face, she had Ehrinn Cummings kneel in garters to lick the dust off blinds, and Eva Herzigova wield a meat cleaver to riveting effect. When she went to Vogue, Roitfeld pushed the photos even further. The shoots featured young, careless women dangling babies from one arm or dropping cigarette ashes into Chanel bags; one showed a vampire at home, wine streaming down her chin like blood; a 2008 ode to Anna Nicole Smith had Natasha Poly as the decidedly unvirginal bride.

Which brings me to another thing I love about Roitfeld: not the superlative Frenchness most people see in her, but her absolute knack—and empathy—for that which is most American. In November 2006, she put Paris Hilton on the cover of Vogue Paris, and though Hilton then held the distinction of being simultaneously the most boring and the most vulgar person alive, in the photos she looked absolutely neither. A year later, the cover had Andre J.—a bearded, gender-bending New Jersey-born black guy—dressed to lunch in a blue neoprene Burberry trench and ankle boots. Roitfeld has always proved you don’t have to be political to be revolutionary. When she launched CR Fashion Book, it was the first time anyone had put clothes on Kate Upton for a cover shoot. Issue No. 3, last year, gave Kim Kardashian the same chic, unblinking treatment.

As a fellow arriviste, I often crave a campy, vampy yet dead-serious take on America that most of the city’s stylish elites lack. Roitfeld’s always good for it, though. Let other editors stay both obsessively youth-crazed and totally stuck on “Old Hollywood.” In another 15 years, when she’s 75, Roitfeld will still be changing things up.

Photography by Liz Collins/trunk archive
Get the best of FASHION in your inbox Thanks for signing up!
The latest fashion, beauty and celeb news delivered right to your email #FASHIONforall Now, check your inbox to complete your subscription
We won’t ever use your email address for anything else
Want even more FASHION? Follow us on social media.