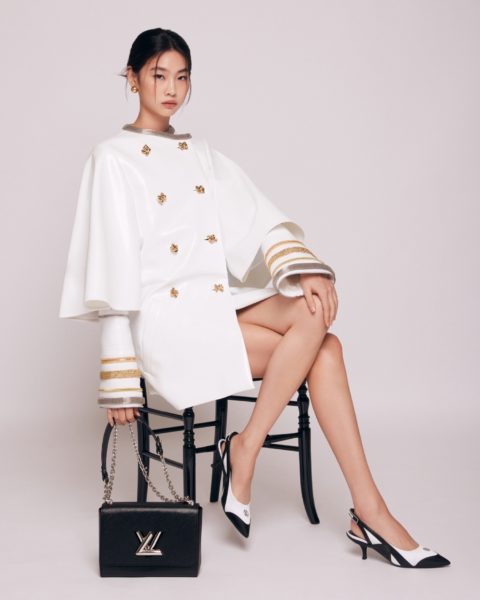 She deserves all the fame.

If you haven’t yet watched Squid Game, chances are you’ve heard all about it from friends, family or social media over the past few weeks. The South Korean drama survival show has been dominating the internet — it’s even on track to become the most-watched show in Netflix history. With Squid Game’s exponential rise in popularity, it’s no surprise that one of its stars, model HoYeon Jung, just announced a huge new deal, as the new face of Louis Vuitton.

The fashion house on October 6 shared the news that she would be joining as global house ambassador for fashion, watches and jewelry.

Created by Hwang Dong-hyuk, Squid Game is Jung’s first-ever acting gig. The eerie and suspenseful thriller follows a group of characters whose worlds are overcome by poverty and crippling debt. In efforts to turn their lives around, they enter a competition in a remote location where contestants play traditional Korean children’s games to win a cash prize. Hundreds of people enter, but only one person can win. And when eliminated, players pay the price with their lives. The show is a poignant critique of class inequality, privilege and capitalism, all while highlighting the nuances of human desperation and greed. (Content warning: it’s also very graphic.) Squid Game is a widely agreed-upon masterpiece — with plot points that resonate among viewers all over the world.

Jung has become a clear-fan favourite. The 27-year-old plays contestant no. 067, Kang Sae-byeok, a sly, quick-witted pickpocket who fled North Korea. Her money motives all centre around her family: she’s trying to get her little brother out of an orphanage and reunite with her mother, who’s still stuck in the North. Aside from her captivating screen presence (she’s got that cool-girl aura), Kang is adored by fans for her smarts and genuineness despite the horror of the games. And with Louis Vuitton’s new recruit of the actor, her super-stardom has been even further solidified.

Jung is not at all new to the fashion world. In 2013, she came in second on Korea’s Next Top Model when she was just 19 years old. Three years later, she walked in her first major runway show with Louis Vuitton, sporting a standout look of fiery red hair. Throughout her modelling career, she’s walked for other luxury fashion houses such as Marc Jacobs, Bottega Veneta, Chanel and Miu Miu, as reported by Teen Vogue. And now, she’s in one of the most coveted positions that fashion houses have to offer. That’s what we call a full-circle moment.

#HoYeonJung for #LouisVuitton. Perfectly embodying the independent Louis Vuitton woman, the actress and new Global House Ambassador for Fashion, Watches, and Jewelry continues this journey with the Maison after gracing the runway in 2017. pic.twitter.com/l1Ucby01L6

“It is an honour to start my acting career with Louis Vuitton, the brand I have modelled for. I look forward to all the moments with Louis Vuitton as a global ambassador,” says Jung in a statement. Louis Vuitton has made it a habit of scouting international superstars. In April, the fashion house announced K-pop group (and worldwide sensation) BTS would be global brand ambassadors. Nicolas Ghesquière, the brand’s Women’s Artistic Director, says he “immediately fell in love” with Jung’s talent and personality. “I am looking forward to starting this new chapter of the journey we started at Louis Vuitton a few years ago,” he adds.

It’s safe to say we all collectively have a crush on HoYeon Jung, who has reportedly become the most followed South Korean actress on Instagram. We cannot wait to see what comes from her role as global ambassador with Louis Vuitton.

Photography Courtesy of Louis Vuitton
Get the best of FASHION in your inbox Thanks for signing up!
The latest fashion, beauty and celeb news delivered right to your email #FASHIONforall Now, check your inbox to complete your subscription
We won’t ever use your email address for anything else
Want even more FASHION? Follow us on social media.