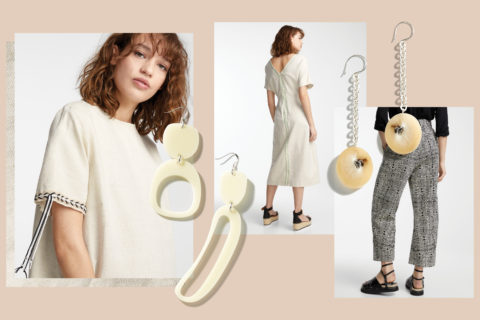 Highlighting the work of eight Indigenous designers from across Canada, Simons will launch a capsule collection on June 1 in collaboration with Indigenous Fashion Week Toronto (IFWTO); it boasts bold patterns, complex beadwork and intricate embroidery that all speak to the unique traditional backgrounds of the creatives involved. Each participant was asked to lend their particular craft to a templated set of garments designed by the Simons team (including a boxy top and high-waisted trousers made from an organic cotton and linen blend), and some also created a selection of accessories.

“It’s such a great opportunity to show the broader fashion public—whether it be media, bloggers, stylists or anyone who’s interested in clothing—that despite the fact that we’re all using the same garments, they all look incredibly unique,” says Evan Ducharme, a British Columbia-based fashion designer who is part of the project. Ducharme is Métis and has ancestral ties to the Cree, Ojibwe and Saulteaux peoples. “It allows for the uniqueness of our Indigeneity and our own individual nations to come through in the work,” he adds.

Ducharme and fellow collaborators Caroline Monnet, Niio Perkins, Warren Steven Scott, Tracy Toulouse, Tania Larsson, Jordan Bennett and the brand Injunuity Design Studio (helmed by Cheryl Copenace) were invited by Sage Paul, the founding collective member and artistic director of IFWTO, to take part in the opportunity. “When Simons was brought up in the conversation, my interest was piqued because I don’t think any major Canadian fashion retailer has taken it upon themselves to collaborate in this way with Indigenous designers or artists. It’s very exciting to be a part of it,” says Ducharme.

It’s equally exciting for Océane Stanislas, a buyer for Simons’s Edito department, who decided to work with Paul on the collaboration after gaining a better understanding of what she describes as the “couture level” technical skills of Indigenous designers and artists. “I didn’t just want Sage to recommend a few artists and then for us to say ‘We’ll take it from here,’” she says. “That wouldn’t be the right way to go about it.”

Avoiding any suggestion of appropriation was imperative, adds Stanislas, recalling notorious instances in which well-known fashion designers employed Indigenous craft techniques and iconography in their collections without giving the communities any credit. “The fact that you don’t know how to approach the conversation doesn’t give you the right to use them without even trying,” she says.

Hopefully, the IFWTO x Edito collab will inspire a more inclusive and dynamic Canadian fashion landscape despite challenges such as geographical distance. “We wanted to work in a model that supports the values and methods of Indigenous designers, accommodating the fact that they’re making pieces here in Canada, that they’re hiring people in their communities and that many of them are not based in big cities,” says Paul. “We wanted to be accommodating of their time and when they get paid and ensure their artistic freedom.”

The news follows the announcement of the store’s plans to expand its Fabrique 1840 portfolio to include more Canadian artisans following a spike in traffic and sales since the pandemic began.

Photographs courtesy of Simons. Design by Danielle Campbell.
Get the best of FASHION in your inbox Thanks for signing up!
The latest fashion, beauty and celeb news delivered right to your email #FASHIONforall Now, check your inbox to complete your subscription
We won’t ever use your email address for anything else
Want even more FASHION? Follow us on social media.