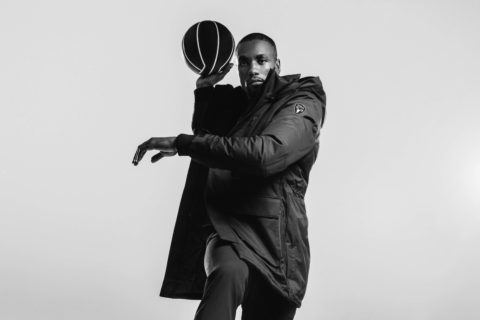 The NBA player is an international fashion and sports icon — a perfect fit for the label.

It isn’t often that two very different worlds find a merging beacon. However, a particular Toronto-based athlete has effortlessly managed to straddle the worlds of both sports and fashion. Serge Ibaka, arguably the most stylish member of the Toronto Raptors, has just been named the new global ambassador for Canadian luxury outerwear brand Nobis. The NBA star will be the face of Nobis’s worldwide campaigns, starting with a special-edition collaboration drop in 2020.

In the first images from his inaugural campaign with the brand, Ibaka is photographed wearing the Nobis Kane Utility Parka and the Martin Hooded Parka. According to Nobis, it’s his “thoughtful and globally-inspired style” that makes him the perfect face for their brand. Anyone who follows the Raptors knows that the seven-foot-tall centre forward with impressive stats across 10 NBA seasons is also an international style icon. His native Brazzaville roots are infused into many of his bold looks and he’s also often photographed in fits with a sleek European flair. Off the court, Ibaka can be seen wearing everything from custom Valentino suits to Chanel sweatshirts and Louis Vuitton crewnecks. Even when he’s out on injury reserve, supporting his team court-side is just another opportunity to dress to the nines.

Doctor: Serge please you need to go back to Toronto and rest your ankle Me: Nah I need to get this fit off in LA ???(Caption copyright @stevenlebron)

Ibaka attended the Spring 2020 menswear shows in Paris just after the Raptors clinched the NBA championship title and sat front row at Balmain, Hermès and Kenzo. Aside from his invites to fashion week, the star also models for Prada, Givenchy and Kenzo. Fans deem him the best dressed in the NBA, which is hard to argue with considering Ibaka is the only professional athlete from Toronto to appear on Vanity Fair’s annual best-dressed list.

Considering how effortlessly he merges fashion and function, his latest off-the-court move—teaming up with Nobis—makes perfect sense. Expect plenty of winter style inspo when he starts rocking up to games dressed in the outerwear label’s signature parkas and puffers.