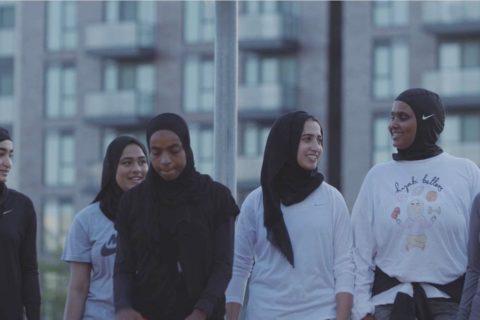 Following their historic win at the 2019 NBA Championships earlier this year in June, the Toronto Raptors are continuously giving us reasons to love them. The latest news from the team? The release of a Raptors-branded Nike Pro Hijab. The launch makes the team the first ever to release a branded hijab in collaboration with sports giant Nike.

Taking to social media across the weekend to announce the launch, the Raptors shared a video featuring members of the Hijabi Ballers, a Toronto-based female basketball club. In the 36-second clip, one woman can be heard saying, “Growing up, I didn’t have so many role models that looked like me. It’s about Muslim females not having to give up their identity or feeling like they have to sacrifice some portion of their identity, but also still play whatever sport they want.” The team wrote that the piece is “inspired by those brave enough to change the game.” So far, the post has been viewed over 120,000 views with 35,000 likes on Instagram and has been retweeted almost 7,000 times.

Inspired by those brave enough to change the game. The Toronto Raptors Nike Pro Hijab is available now. #WeTheNorth

Amreen Kadwa, the founder of the Hijabi Ballers (which was established to celebrate female Muslim athletes and increase opportunities for them), praised the Raptors in an interview saying, “With the Raptors releasing a hijab to this market of hijab-wearing athletes, it shows that they’re a team that actually truly respects diversity and inclusivity and will take that extra step to involve Muslim athletes in their growth as a team and organization.”

The hijab is finished in black with a white raptors logo on one side, and the iconic Nike swoosh on the other. It retails for $40 and is currently only available for purchase in Real Sports at Scotiabank Arena in Toronto. It is not yet currently known when it will be available online for purchase. Stay tuned.