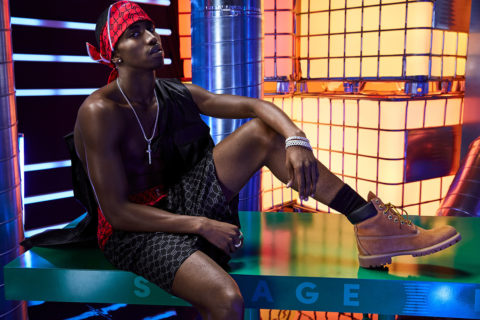 The Fenty empire continues to grow.

Rihanna has announced today that her lingerie line Savage x Fenty is expanding into menswear, and you already know it’s going to be so good.

The Grammy Award winner-turned-designer has teamed up with rapper Christian Combs – son of Sean “Diddy” Combs – to design the collection which is comprised of underwear and loungewear. Speaking of her decision to team up with Combs, RiRi said in a release, “After Christian did such a great job at the 2019 fashion show wearing men’s, I knew we had to have him as a collaborator.”

The line is made up of 11 pieces, including boxers, trunks and boxer briefs, as well as a smoking jacket and satin pant. All of the pieces are finished in either a cool monogram print or with a Savage x Fenty waistband in a colour palette of black, white, red and blue. And although the collection has been designed for men, Rihanna noted in the release that it’s all gender-fluid, saying, “I wanted to create men’s wear styles that everyone can wear.”

The menswear collection will launch on October 2nd – the date that the highly anticipated Savage x Fenty Vol. 2 runway show will be streamed on Amazon Prime. Combs is set to feature in the show, appearing alongside Cara Delevingne, Lizzo, Bella Hadid, Laura Harrier, Demi Moore and other notable faces. It will be soundtracked by Travis Scott, Bad Bunny, Miguel, Ella Maim Roddy Rich and Rosalía.

Photograph courtesy of Savage x Fenty
Get the best of FASHION in your inbox Thanks for signing up!
The latest fashion, beauty and celeb news delivered right to your email #FASHIONforall Now, check your inbox to complete your subscription
We won’t ever use your email address for anything else
Want even more FASHION? Follow us on social media.