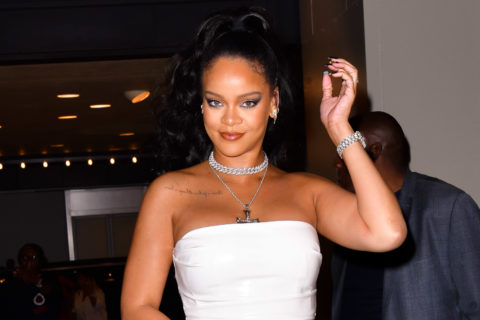 Make sure you're free October 2.

In news we all needed this week as the weather starts to cool down and lockdown looms once again – Rihanna is bringing the second round of her Savage x Fenty show to Amazon next month.

The news was announced today in a video uploaded by Amazon Prime. The Savage x Fenty Vol. 2 show is to take place on October 2nd and, as per usual, looks set to be a showcase we won’t soon forget.

The short teaser showed RiRi walking around backstage in a face mask and face shield and revealed that a host of music’s top names will perform throughout the show including Travis Scott, Miguel, Rosalía (who recently starred in her first MAC campaign wearing Toronto-based designer Mikhael Kale), Bad Bunny, Roddy Rich and Ella Mai.

And if that wasn’t enough to get your excited about this year’s show, the list of confirmed names should do it. Cara Delevingne, Lizzo, Demi Moore, Bella Hadid, Irina Shayk, Big Sean, Will Smith, Normani, Paris Hilton, Paloma Elsesser, Laura Harrier, Shea Coulee, Miss 5th Ave, Jada Essence Hall, Rico Nasty, Christian Combs, Chika and Erika Jayne are among those confirmed to appear on the runway.

To catch all the action live, you’ll need an Amazon Prime subscription. From there, you can watch it on just about any screen you have in your house. Or all of them.