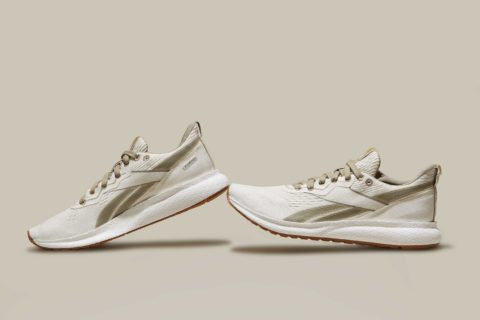 Walk, jog or sprint into a more sustainable future.

Next fall, American footwear and apparel brand Reebok will take another step toward sustainability with the launch of its first plant-based performance running shoe. Named Forever Floatride Grow, the new shoe is an upgraded version of one of the brand’s “shoe icons,” Forever Floatride Energy, which offers lightweight responsive cushioning and breezy ventilation.

The differences between the mechanics of Grow compared to the Energy shoe are in the materials used. The cushioned midsole in Forever Floatride Grow is exclusive to Reebok and is constructed of castor beans, making this their biggest advancement in sustainability. Eucalyptus trees are sourced for the shoe’s upper, and the sock liner is odour-resistant thanks to Bloom algae foam. Its fourth element is the natural rubber outsole, which unlike the petroleum-based rubber used in typical performance products, is sustainably sourced from real rubber trees. Notably, these natural materials don’t compromise the high-performance of the shoe.

“With Forever Floatride Grow, we’re replacing oil-based plastic with plants,” said vice president of Reebok Future, Bill McInnis, in a press release. “The biggest challenge in making a shoe like this was developing plant-based materials that could meet the high-performance needs of runners. During the three years we spent developing this product, we heard loud and clear that the idea of a plant-based running shoe resonates strongly with serious runners. But those same runners felt just as emphatically that they would never compromise on performance.” The new Forever Floatride Grow is the result of melding performance with sustainability, and will be available for purchase online in fall 2020.

This is Reebok’s second take on a sustainable product. Their eco-friendly Cotton + Corn collection launched last year, then received a more elevated revisal in 2019 when it was made vegan. The shoe later received an award from PETA with appraisal that the shoe “perfectly demonstrates the superiority of cruelty-free, plant-based technology over leather and other animal-derived materials, and provides trendsetters and activewear enthusiasts alike with sneakers that are durable, light, zero-waste, and, best of all, animal-friendly.”

Running is the number one activity in fitness, and according to the athletic-wear giant’s president Matt O’Toole, athletes are actively seeking shoes with a low environmental impact. “Our consumers have told us they want more sustainable products, and the running community has been the most vocal and passionate on this issue. We want to help runners perform at their best, while also feeling good about the products they wear.”

These developments are happening elsewhere in the footwear industry too. San Francisco-based Allbirds is a shoe brand that has been working on an eco-friendly platform from the start. Favouring natural resources, their shoes are made from materials like merino wool, eucalyptus tree pulp and even sugarcane, while the insoles are constructed of castor bean oil. Though there’s no telling which brands will follow suit, and to what extent, it looks as though the shoe industry is slowly starting to re-evaluate their impact on the planet. Reebok, for their part, is aiming to use only 100%-recycled polyester in their footwear and apparel by 2025. So stay tuned for more environment-focused updates from the brand in the months to come.

Photography courtesy of Reebok
Get the best of FASHION in your inbox Thanks for signing up!
The latest fashion, beauty and celeb news delivered right to your email #FASHIONforall Now, check your inbox to complete your subscription
We won’t ever use your email address for anything else
Want even more FASHION? Follow us on social media.