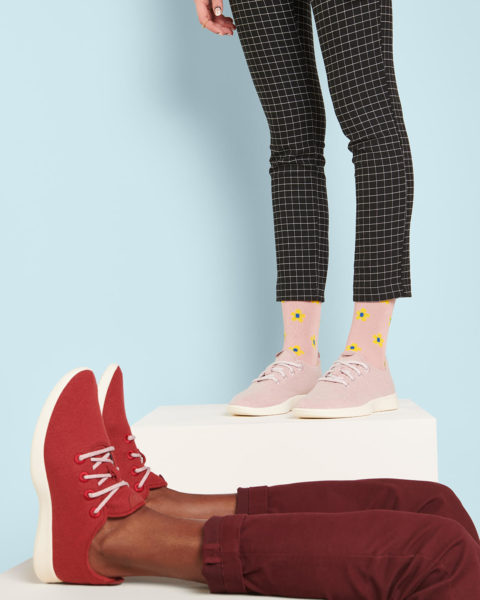 Meet “The World’s Most Comfortable Shoes”

This San Francisco startup is changing the shoe game

Last spring, I found myself walking the streets of San Francisco—from historic Jackson Square through Chinatown, over to Little Italy and back—for hours, thinking to myself, ‘I never want to take these shoes off.’ Now, I love shoes as much as the next girl. (Okay, maybe more than the next girl.) But this was a new sentiment, even for me. Turns out, it wasn’t hyperbole when TIME magazine dubbed sneaker start-up Allbirds—which launches its Canada e-retail today—“the world’s most comfortable shoes.”

But that’s not the only thing that sets them apart in the very crowded sneaker space, which has acquired somewhat of a cult patina over the past few years. Allbirds’ USP lies in what their shoes are made out of. No, it’s not some high-tech performance material developed in a lab. No, it’s not some newfangled Silicon Valley-generated synthetic fibre. It’s… wait for it… Merino wool. Since March 2016, the company’s impossibly soft wool lace-up sneakers and slip-on shoes have been flying off shelves, attracting everyone from tech leaders like Google co-founder Larry Page to Hollywood A-listers like Emma Watson and Mila Kunis to world leaders like Barack Obama. Allbirds has since expanded beyond wool, launching shoes made from a lightweight and breathable fibre spun from eucalyptus tree pulp last spring, and flip flops made from sugarcane in the late summer.

You’ve probably caught on to the fact that Allbirds is no ordinary shoe company.

From innovation to sourcing to design to packaging, every aspect of their decision-making takes the environment into consideration. Sure, sustainable is the buzzword du jour, and it’s led fashion brands across the globe to hop on the bandwagon, often at the expense of good design. Unfortunately, this means consumers have come to expect a sad compromise when it comes to ‘green’ goods—low on style, high on conscience. But that’s precisely the landmine that Allbirds’ founders, former New Zealand footballer Tim Brown and renewable materials expert Joey Zwillinger, have managed to neatly dodge, with a brand philosophy that leads with design first, sustainability second. What’s the point of being an eco-friendly business if no one’s going to buy what you’re selling?

The initial idea for Allbirds began germinating in Brown’s head around 2009-2010 with a “pure design vision”—a singular, logo-free, minimalist sneaker. The idea of crafting them out of natural materials came later.

“In a previous life, I had a sporting career,” says Brown. “I was playing in the Australian Soccer League. I was sponsored by Nike, and everything I had to wear had logos on it. But around that time, there was a big shift happening in apparel and fashion. You were seeing that unbranded, simple, Everlane aesthetic starting to take over in a way it hadn’t before. And so I thought there was room [in the market] for a simple sneaker.”

But as he immersed himself in the workings of the footwear industry, he became aware of how little it had evolved over the years. The materials used are either synthetic or leather, and its dependence on non-biodegradable petroleum-based products makes the footwear industry one of the worst offenders in terms of environmental impact. That was when the idea of a sneaker made out of natural materials began to coalesce in Brown’s mind, especially given the fact that he hails from New Zealand, “the land of 27 million sheep.” But as a native Kiwi, he knew his perceptions of wool were vastly different from others’. “When you hear about wool as an American or Canadian consumer, you think hot and scratchy. First of all, not all wool is created equal.” Allbirds sneakers utilize 17.5 micron, superfine, New Zealand merino wool. “It’s some of the finest fibre in the world,” says Brown.

Armed with the idea of a single sneaker crafted out of wool, Brown embarked on a years-long journey, one that involved hundreds of evolving prototypes, which Brown admits were “so bad”; a wildly successful 2014 Kickstarter campaign, followed by “the worst year of [his] life trying to fulfill those orders”; and eventually a meeting with Zwillinger (their wives are best friends), who was working in the renewable materials space at the time and quickly became intrigued with Brown’s mission. With Zwillinger’s help, they secured venture capital funding for their start-up, and with seed money of $2.25m, got to work. They launched in 2016 with the Wool Runner, a lace-up sneaker, followed by the Wool Lounger, a slip-on, and a line of shoes for kids, endearingly called Smallbirds.

Sustainability may not have been their founding principle, but it’s been a core part of their business model right from the start. They regularly conduct LCAs—Life Cycle Analyses—to “understand the environmental impact of carbon footprint of our product,” says Brown, and also achieved B Corp certification. “Instead of taking a shareholder-only approach—that’s the norm for any business in America, particularly with public companies; they have a duty or obligation to their shareholders—we’ve put in the charter of business that we have a public benefit, that we also have as a stakeholder the environment,” Zwillinger explains. “Hopefully long after we’re gone, the managers of Allbirds will be beholden to the environment as well as shareholders. We’ve really baked that into the DNA of the business. We live it every day.”

Allbirds employs what can be deemed a kind of stealth sustainability – it’s not the first thing they want you to notice about the brand, and it’s not the first thing they talk about when they discuss their philosophy. According to Jad Finck, VP of Innovation and Sustainability, “We don’t want to be a sustainable shoe company, we want to be a company that makes great shoes and we do it sustainably.” They may not be shouting it from the rooftops but the environment is omnipresent, not just in their thinking but even in their office space. A lush green wall of preserved plants with the Allbirds logo emblazoned across the middle welcomes you to their San Francisco headquarters, where meeting rooms are named after New Zealand bird species (Hihi, Tui, Kiwi), the bathrooms are dubbed Birdbaths, and the conference room table is a giant slab of redwood, sanded, polished and assembled by the employees themselves. There’s a playful element running through the company’s ethos, from the name (named for New Zealand, which early settlers, during their first exploration of the islands, discovered was “all birds” and not much else), to the quirky branding and photography, to the names of the seasonal (and hard to precisely identify) colourways their shoes come in—it’s not brick red, it’s ‘chili’, it’s not a greenish taupe, it’s ‘sage,’ and it’s not blush, it’s ‘dusk.’ But behind all that whimsy is serious stuff. Here’s a quick run-down: the Wool line is made of responsibly sourced merino wool from ZQ-certified farms in New Zealand that meet the highest standards in terms of animal welfare, environmental care and social sustainability; the shoelaces are made from post-consumer plastic; and the insole is constructed out of a castor bean-derived polymer. The Tree line, whose upper is fashioned out of eucalyptus tree fibres, is FSC-certified, which means it’s been vetted and approved by the Forest Stewardship Council, an environmental watchdog group. “It’s a really holistic certification,” explains the brand’s Sustainability Analyst Hana Kajimura. It ensures they’re “not harvesting baby trees, not taking from endangered forests or places where there are endangered species, and also [considers] indigenous people’s rights as well as things like water quality and fertilizer use.”

While their sustainability game is solid, it’s not the main reason why the brand has developed a cult following in the short time since its launch. The design is clean, sleek and simple—“the right amount of nothing,” quips Head of Design Jamie McLellan—yet instantly recognisable. They might have started out as the sweethearts of Silicon Valley, beloved by head honchoes at Google, Twitter and Apple, as well as tech magazine editors (apparently “they’re as plentiful as MacBooks at the WIRED office”), but their appeal has spread way beyond the tech realm. I counted several at the San Francisco airport and also spotted them in Austin during South by Southwest. Outside of the United States, though, they’d been limited to Australia and New Zealand—until last March, when they launched their Canadian online presence.

“Our philosophy is: you’ve got to go products first,” says Finck. “You have to make a product that people love, they love the way it looks, the way it feels. We could say ‘oh it’s an eco-shoe but it’s scratchy and falls apart’ but then we’d have no power to change anything. Unless people [want to] buy our products, no one’s listening and no one cares.”

Suffice it to say, people care.

Photography via Allbirds
Get the best of FASHION in your inbox Thanks for signing up!
The latest fashion, beauty and celeb news delivered right to your email #FASHIONforall Now, check your inbox to complete your subscription
We won’t ever use your email address for anything else
Want even more FASHION? Follow us on social media.