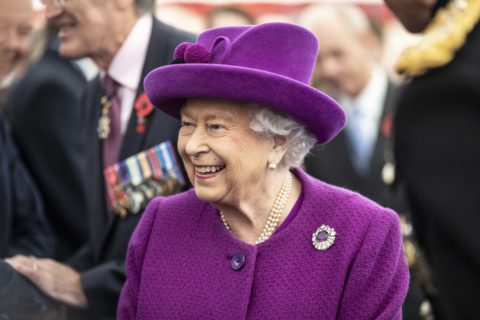 Queen Elizabeth is Going Fur-Free With All Her Future Outfits

"As new outfits are designed for the Queen, any fur used will be fake," says Buckingham Palace.

In recent months, Coach, Burberry, Gucci, Prada and even the state of California have announced they’re going fur-free. The latest big name to join the ethical and environmental cause? Queen Elizabeth II.

The Queen’s dresser, Angela Kelly, shared this sartorial decision in her new memoir The Other Side of the Coin: The Queen, the Dresser and the Wardrobe (which, by the way, is “fully endorsed by the Queen”). Kelly, who has worked with the monarch for 25 years, shares in the book details about her experience selecting the Queen’s wardrobe, jewels and other accessories. According to publisher Harper Collins, the book features “never-before-seen photographs” and “charming anecdotes” of their time together. It also, as has been reported by multiple outlets, shares the Queen’s current stance on wearing fur.

“If Her Majesty is due to attend an engagement in particularly cold weather, from 2019 onwards fake fur will be used to make sure she stays warm,” writes Kelly.

Buckingham Palace confirmed the news, telling UK media in a statement that, “as new outfits are designed for the Queen, any fur used will be fake,” but that she will “continue to re-wear existing outfits in her wardrobe.”

The decision to continue wearing some of the fur pieces she already owns (such as capes and coats with fur trims) seems to be in line with the Queen’s desire to upcycle clothing and avoid waste. “Her Majesty is thrifty and likes her clothes to be adapted and recycled as much as possible,” writes Kelly in the book.

According to CNN, “in 2013, the Queen was urged by PETA, an animal rights charity, to get “with these more enlightened times.”” The same organization is clearly applauding the news, tweeting from its official account: “We’re raising a glass of gin and Dubonnet to the Queen’s compassionate decision to go fur-free.” Mimi Bekhechi, PETA’s Director of International Programmes, says the new policy “is a sign of the times, as 95 per cent of the British public also refuses to wear real fur.”

Check back for more updates as the fur-free movement continues to gain traction around the globe.