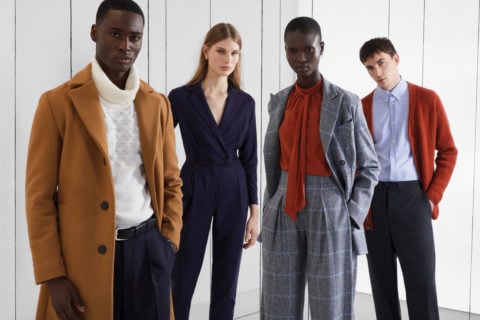 How Prince Charles is Supporting a New Generation of Designers

The Prince of Wales's decades-long devotion to sustainability is having a measurable impact on the fashion industry.

The sleek, sexy jumpsuits, dresses and tops that Nicole Christie creates for her start-up luxury brand, Ellipsis, would not exist without HRH The Prince of Wales. Christie started her business during the pandemic after taking an intensive training program called The Modern Artisan, which was developed by The Prince’s Foundation in Scotland to focus on small-batch runs of designer fashion that can be made with textiles sourced from luxury mills in Britain and Europe. “Coming from The Modern Artisan has totally shaped my business,” she says, noting that she has adopted the sustainability ethos that runs through all of the prince’s endeavours.

The 73-year-old heir to the thrones of the United Kingdom, Canada and 13 other realms has been a vocal advocate in the fight against climate change for decades; he was just 21 years old when he warned about the effects of plastic pollution in 1970. Since then, his efforts have evolved to include everything from preserving traditional crafts to transforming royal agricultural lands into organic operations to pushing toward a sustainable future.

Along the way, Prince Charles has become the most unusual of fashion influencers. His social media accounts focus on his projects and charities rather than images of him in cutting-edge fashions, and he’s more likely to wear carefully mended suits and repaired shoes than the latest runway designs. “If you look at the way the Prince of Wales dresses, you will see a lot that is renewable, a lot that has been mended, a lot that has been recycled and a lot that has been kept and looked after,” says Peter Ackroyd, COO of The Campaign for Wool, another of Prince Charles’s style-related initiatives. “And that is a key part of his message: ‘Don’t throw things away, buy things to keep, buy things to look after.’”

Indeed, a dive into the increasingly important issue of sustainability within the fashion industry reveals that, through his own style choices and efforts in the industry, Prince Charles is having a measurable impact. Both are an extension of his passion for architecture, heritage and the crafts, says Jacqueline Farrell, education director for The Prince’s Foundation at Dumfries House, including its Future Textiles program. (Dumfries House, which is about 45 minutes outside of Glasgow, is in one of the most deprived areas of Scotland.)

With regard to his fashion efforts, this means that not only is he a proponent of using ethically sourced natural fabrics, such as wool or linen, but he also ensures that they are made in local textile mills and manufacturing sites and by skilled workers who thus keep their often-rural communities going. “It’s the skill set that he’s interested in preserving — the idea that these craft forms, whether they’re for the heritage environment or within luxury fashion, don’t get lost,” notes Farrell. “And it’s easy to lose them in mass production, but we can’t lose them forever because these things are actually invaluable for the future security of the planet.”

In 2013, conversations with those in the fashion and textile industries led Prince Charles to “realize that there was a gap in textile technical skills in the United Kingdom,” explains Farrell. She created a series of education and training programs under the umbrella Future Textiles brand that not only raise awareness about these technical jobs but also graduate students who are ready “to sit on a production line and make luxury products.” Each year, more than 1,400 people, from schoolchildren to retirees, take Future Textiles courses and programs, which range from basic sewing and embroidery lessons to The Modern Artisan and six- to 12-week industrial-sewing courses. Most of these are offered at Dumfries House. Its programs are free to students to “allow people who wouldn’t normally have access to that type of education to take part,” says Farrell. Courses are also offered in London, and later this year, they’ll be taught at Highgrove, Prince Charles’s private estate in Gloucestershire, England.

Skills are the core of the curriculum, but sustainability issues are also embedded in the programs, explains Farrell. So while Modern Artisan students spend six months sitting at sewing machines learning how to handle luxury fabrics and developing the skills — such as a perfect one-centimetre seam allowance — needed to create high-end garments, they also collect all the scraps, which are then used by other students for things like appliqué. (Buttons and zippers are also reused.)

Thanks to a partnership between The Prince’s Foundation and Yoox Net-a-Porter, Modern Artisan students spent time in Milan learning about e-commerce, marketing, merchandising and warehousing. Christie, who also has a degree in fashion design, incorporated those lessons into her business: She uses detailed analytics to determine her customers’ interests, is careful in sourcing her fabrics and turns scraps into headbands and other items.

For their graduation exam, Christie and her fellow students created a capsule collection to be sold on Net-a-Porter in November 2020 that embodied the sustainability goals of The Modern Artisan. Prince Charles met them at key points in the program, such as for a review of the finished fashion items. (“It was the highlight of my career,” says Christie.) One item was an £895 pair of women’s pants, described as being “tailored from an end-of-roll Prince of Wales checked cashmere cloth, then lined by hand in GOTS-certified organic and 100 per cent traceable silk,” with half of the sales donated to The Prince’s Foundation.

On February 3, Christie showcased her Ellipsis fashions to more members of the Royal Family when Prince Charles took his wife and daughter-in-law to the London training site of The Prince’s Foundation. “It was the most surreal and incredible experience,” Christie recounts. Afterwards, she presented handmade silk bags to Camilla, Duchess of Cornwall, and Kate, Duchess of Cambridge, and a pink scrunchie made from recycled scraps to Kate’s six-year-old daughter, Princess Charlotte. The Scottish designer may have snagged a royal client in the process: Kate was reportedly very interested in Christie’s evening gowns.

Prince Charles’s interest in sustainability extends beyond training efforts to his own wardrobe choices. He has long promoted British fashion, including famous luxury bespoke firms such as those that make his double-breasted suits, blazers, shirts and casual country clothes, all designed to be worn for decades. In the St. James’s area of London, where his Clarence House residence is located, shop after shop has received a Royal Warrant from the prince, including John Lobb, whose handmade shoes can be repeatedly repaired, and Anderson & Sheppard, whose softly tailored double-breasted suits are iconic princely garments. Indeed, Prince Charles donned a 34-year-old formal morning coat to walk Meghan Markle down the aisle to marry Prince Harry in 2018.

“I think he’s got an amazing sense of style,” says Farrell, noting that the Prince of Wales has been on numerous best-dressed lists in recent years. “What we are defining and redefining as fashion now is that there is fast fashion, which is incredibly disposable, and then there is classic fashion,” she says, adding that the prince is definitely in the latter category. “I would say he’s incredibly fashionable.” Even so, perhaps the future king’s next fashion move will be to wear something from the sustainability projects he has worked so hard to create.