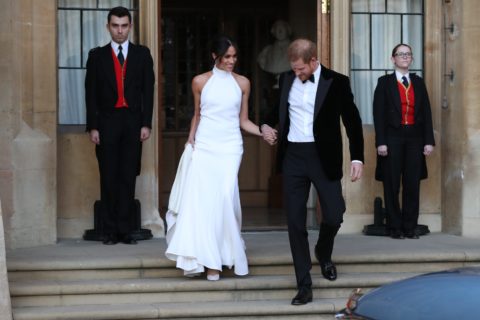 Turns out the Prince of Wales knows how to throw a raging house party.

Hours after the world tuned into the royal wedding of Prince Harry and Meghan Markle (now the Duke and Duchess of Sussex), we were given yet another glance of the couple as they headed off to their reception. In preparation for their party, Meghan changed from her elegent Givenchy gown into a custom Stella McCartney halter dress, while Harry switched his military uniform for a sleek tux. The couple then stepped into a baby blue jaguar and drove off to the party—James-Bond style. While the ceremony was followed by a lunch reception for all 600 wedding guests, the evening event was a little more exclusive, with only 200 friends and family making it onto the guest list.

The Duke and Duchess of Sussex depart Windsor Castle for a reception hosted by The Prince of Wales at Frogmore House, in a silver blue Jaguar E-Type Concept Zero. This vehicle was originally manufactured in 1968, and has since been converted to electric power #RoyalWedding pic.twitter.com/hRrxEUlFlJ

Those 200 lucky guests reportedly had to turn their phones in at the beginning of the nighttime reception, ensuring that the party remained an A-list secret. However, thanks to some unnamed sources, we hear it was quite the rager. In true Markle style, Meghan broke the norm by making a tear-jerking speech at the reception. She is said to have thanked her new in-laws, the Duke and Duchess of Cornwall, for welcoming her and her mother into the family. When addressing her mother, Meghan herself got misty-eyed as she thanked her for her support. Apparently, Meghan did not address her father, Thomas Markle, who backed out of the wedding last minute due to a recent heart attack. She then finished her speech by speaking directly to Harry, and saying how excited she was for their next chapter.

After the waterworks, it was time for the fun bit. The DailyMail reports that James Corden used his talk-show-host abilities to MC the wedding reception, acting as referee for a dance-off between William, Harry and Charles. The reigning prince of Hollywood (George Clooney) also got his groove on, dancing with both Meghan and Kate Middleton. After the older attendees *cough Prince Philip* left at around 10:30pm, things really amped up. Clooney went on to serve as bartender, jumping behind the bar to pour guests shots of tequila (I mean he does have his own brand of tequila after all). But Corden and Clooney weren’t the only celebs putting themselves to work: actor Idris Elba reportedly hopped on the turntables to DJ, while Meghan’s friend and tennis star Serena Williams was champion of a beer pong tournament. Guests danced the night away, drinking champagne and snacking on mini burgers and candy floss.

All in all, this wedding reception sounded like an absolute blast. How are the husband and wife recovering from the event? Meghan and Harry are set to have their first royal engagement as a married couple today at Prince Charles’ 70th birthday. And though Charles’ birthday is sure to be fun, we highly doubt it will be George-Clooney-pouring-tequila-shots fun.

Photography by Steve Parsons/Getty
Get the best of FASHION in your inbox Thanks for signing up!
The latest fashion, beauty and celeb news delivered right to your email #FASHIONforall Now, check your inbox to complete your subscription
We won’t ever use your email address for anything else
Want even more FASHION? Follow us on social media.