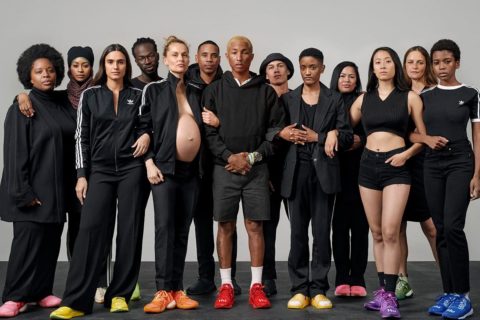 The campaign is called "Now Is Her Time".

Pharrell Williams has just unveiled his new campaign for his latest adidas Originals capsule, called “Now Is Her Time”, and it’s a scroll-stopper.

The unisex collection features clothing and footwear, designed to fit your individual taste. Described by the brand as “a democratic offering”, the collection also includes new colourways in some of its most iconic styles including the Solar HU, NMD and BYW. Plus, some of the footwear styles in the collection are emblazoned with the words gratitude and empathy.

This is the second campaign with a focus on inclusivity and female empowerment that’s crossed our desks in less than a week, with Sephora Canada releasing part two of its ‘We Belong To Something Beautiful’, just a few days ago.

The full ‘Now Is Her Time’ capsule by Pharrell Williams for adidas Originals will launch in-store and online from August 31.

Photograph by Collier Schorr/Adidas Originals
Get the best of FASHION in your inbox Thanks for signing up!
The latest fashion, beauty and celeb news delivered right to your email #FASHIONforall Now, check your inbox to complete your subscription
We won’t ever use your email address for anything else
Want even more FASHION? Follow us on social media.