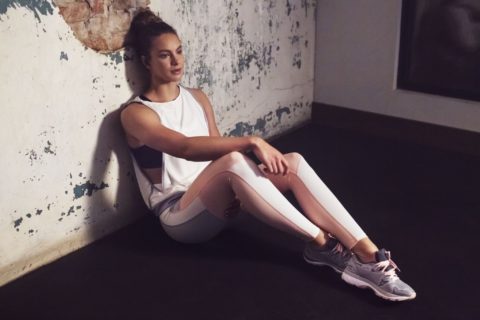 Two Years After Making Olympic History, Penny Oleksiak Is All Grown Up

And then Drake DM-ed me, "Come and see the show!”

Penny Oleksiak became a household name overnight. At 16 years old, she took home Canada’s first gold medal at the 2016 Summer Olympics when she competed in the 100-metre freestyle. And that win was just the start: the medals kept coming, and Oleksiak became the first Canadian swimmer to take home four medals at any Olympic games. (She won two bronzes in the 4 x 100-metre and 4 x 200-metre freestyle relays, and silver in the 100-metre butterfly).

Two years after cheering for her from my couch, I got a chance to sit down with the now 18-year-old. She’s taller than I remember her looking on TV— and a lot more grown up. At 6’2″, she looks more like a supermodel than a professional athlete. (But like, an exceptionally strong supermodel. She might be long and lean, but after spending an hour working out with her and her trainer at a preview for her ASICS campaign, it’s pretty clear she could beat me up if she wanted. Not that she would: she might be the giggliest interview I’ve ever had.)

How has your life changed since Rio? Did you ever expect to have partnerships with huge brands like RBC, Vichy and Asics?

Going into the Olympics, I definitely wasn’t expecting that. I wasn’t even expecting it after. I was so caught up on, “Oh! Everything’s going to be the same. Like nobody really cares about me.”

But a lot of opportunities have come my way since the Olympics, and I’m super super grateful for that. Not just for my partnerships with big companies like Asics, but also the stuff I’ve gotten to do with Me to We and schools in Kenya.

What’s the best part of being an Olympic champ?

Being part of a team. And even though I am in individual sport, I still am a part of Team Canada and I still really support all my other Canadian athletes. And it’s just fun to be able to travel and represent your country on such a big stage.

Is your Canadian pride something you carry with you all the time, even after the closing ceremonies?

All the time. And even when I’m training with Americans in Florida, it’s fun to be one of the only Canadians. Their always saying “aboot” and “eeeh” to me.

All the classic stereotypes.

Exactly. It’s kind of fun and cool to experience. When you’re at home, you don’t really realize how much of a stereotype you are.

What songs are you working out to right now?

Pretty much the whole Kanye album.

Wait…can you listen to music when you’re swimming?

No! That’s what I was talking about the other day. I love music. I wake up in the morning listening to music, go to bed listening to music. And so it’s weird that I’m in, like, the only sport [in which] you can’t listen to music the whole time.

When you tweeted about needing Drake tickets, did you have a sneaking suspicion that he would respond?

I think if I had a gold medal, I would constantly be tweeting about the things I want, hoping that they’d land on my doorstep.

It was genuine. It was just me and my friend looking for tickets online, and seeing how expensive they were. I kind of just put it out there ’cause I just tweet random things all the time. And then Drake DM-ed me, “Come and see the show.”

Did that make you think, “Wow! I can tweet anything, the world is my oyster.”

My friends always say that. They’re like, “You should tweet out, like, I want my chips right now. So drop them off.” But, no. I’m not really that type of person. I won’t take advantage.

What are you looking forward to most in Tokyo for the 2020 Olympics? Are you doing anything to prepare? Practicing your Japanese? Watching anime?

I’m really excited because it’s where Asics originated. So I’m hoping I get to see the culture and history of the brand.

What’s Penny getting up to with ASICS? Here’s a look at her campaign video:

photography courtesy of Asics
Get the best of FASHION in your inbox Thanks for signing up!
The latest fashion, beauty and celeb news delivered right to your email #FASHIONforall Now, check your inbox to complete your subscription
We won’t ever use your email address for anything else
Want even more FASHION? Follow us on social media.