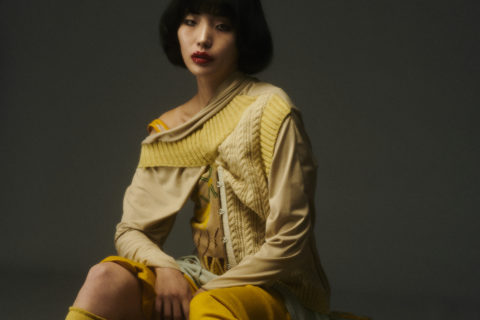 The livestreamed event happens this Friday at 10am EST.

Later this week, sustainable knitwear designer Olivia Rubens, who hails from Ottawa, will compete in the International Talent Support competition taking place virtually this Friday at 10am EST. The 11 finalists in the Fashion category of the prestigious competition (who follow in the footsteps of greats like Richard Quinn, Mark Fast and Demna Gvasalia) are vying for not only The Diesel Award – a €10,000 cash prize and 6-month internship at the Italian brand’s headquarters; the festivities also include a Responsible Fashion Award, and one for People’s Choice.

Rubens is well poised to win the responsibility-focused accolade as the ethos of her brand centres around using ethical production practices as well as upcycled and recycled materials to craft the complexly quirky knits she’s known for. “My motto is that once you know something, you can’t unknow it,” says Rubens while describing her foray into mindful design.

After participating in another design competition several years ago, for which she crafted “the heaviest sweater you’ve ever seen” out of yarn she spun from 15 pairs of second-hand denim, Rubens began to dig deeper into the roots of ethical and sustainable practices. And after learning more about the myriad facets of these issues, including what materials are actually better for the environment versus those that are merely marketed as such, Rubens said there was no going back with for her brand’s direction. As she asks, “Why would you want to continue using certain materials once you know how horrible they are for the planet, or how bad they are ethically in terms of production?”

In addition to not using petroleum-based textiles in her collections, Rubens – a Fellow at the Suzanne Rogers Fashion Institute who did her MA through the London College of Fashion – has collaborated with textile scientists Dian-Jen Lin and Hannes Hulstaert, of the London-based Post Carbon Lab, on two material innovations: Creating a pigment dyeing process using bacteria, and developing ‘photosynthesis coating’ for fabrics (meaning it would convert carbon dioxide into oxygen, and you’d have to water your garment like any low-maintenance houseplant).

“My standards are really high now,” says Rubens about her approach to researching, developing and sourcing the elements that go into her designs. She says that initially the scarcity of sustainable textiles – particularly when she was working out of Toronto – was frustratingly daunting; but she’s built up “a good network” to draw from, and she even lends her skills as a sustainability consultant to others in the industry.

Another way Rubens has taken charge over her destiny as a designer is by going ‘off-schedule’ and choosing to no longer adhere to the traditional fashion week cycle. Having most recently participated in the digitized Helsinki Fashion Week this past Spring, Rubens has decided going forward to “release looks whenever I want. It’s kind of stressful, but also exciting.”

Charting such unfamiliar territory seems second nature to Rubens. Growing up a “weirdo” who was bullied throughout middle school, she says that she considers herself to “be a very resilient and stubborn person. That’s how I got through that period without changing who I was; I was always super eccentric – definitely an oddball. I stuck with that, and I think it made me stronger.”

In fact, Rubens says that what she endured is “a huge influence on where I derive my research, and how I decide to express myself through my work.” Her ongoing interest in unpacking questions about humanity, judgement, and the perceptions we have of one another informed her MA graduate collection, titled Duplicitous Lives, which took inspiration from the research question, ‘Is it possible to really know yourself truly?’

“My perspective is no,” Rubens says with a laugh, adding that in order to do that, one would have to meet “every single human being on the planet, and perform yourself to them because you change based on who you’re in front of. [It’s] logistically impossible.” The notion of identity and how we present ourselves is connected to the collection in other ways, including the inspiration Rubens drew from the work of visual artists Laurie Simmons, Juno Calypso, Nadia Lee Cohen and Cindy Sherman.

“She doesn’t act out anyone specific,” Rubens’s says of Sherman’s challenging oeuvre. “She acts out these types of ‘nostalgic’ people, and we are able to read who that person is without having a direct reference or knowing who that person is. It comes back to us putting our perceptions on people of who we think they are.”

Rubens surmises that for these reasons the journey to self-discovery is never ending; and she says that she also has “more purpose” to fulfill. After creating masks and medical gowns for local long-term care facilities and hospices when quarantine began, Rubens is now contemplating the launch of a sustainable knitwear cycling brand (she rediscovered her love of the outdoors in recent months while back in Ottawa during lockdown). And she says she’ll continue to find ways to improve the lives of others through design. “It’s about creating positive impact through everything I do.”

Watch the 2020 ITS competition here.