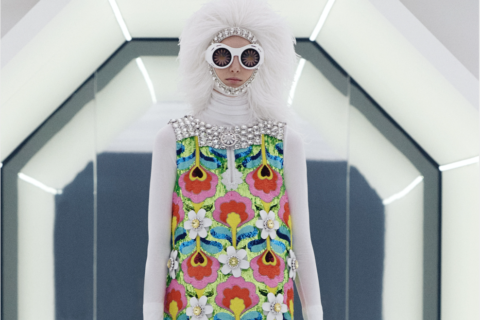 The London-based designer drew from a '60s futurism vibe for the collaboration's pieces, which are available for pre-order today.

Boasting wild motifs and outsized proportions, British designer Richard Quinn’s latest offering for Moncler Genius is an opulent nod to retro futurism. Quinn looked to swinging London icons like Twiggy as inspiration, creating an array of pieces based on shapes like the mod shift dress that feature luxe fabrications such as nylon laqué. Several of the garments, including a faux fur floral coat called Donyale, are named after supermodels of the time.

The collection also puts Quinn’s dazzling prints on fully display. “Some of them are quite psychedelic,” he tells FASHION, highlighting one particularly groovy graphic that resembles a cross between a lava lamp and zebra stripes. Other prints are done in a 3-D style, and there’s a puffer vest covered multi-coloured sequins. Looks are completed with matching leggings for the full far-out effect.

This is the second union between Quinn and the Italian house, and he shares that “sometimes two is better than one” when it comes to design. “It’s nice to not only learn, but to make products that would never have otherwise been made,” he adds. (No wonder designer partnerships are becoming more and more prevalent in the style world.)

Quinn’s latest release comes at a time when his brand, like many others, is grappling with much change and uncertainty within the fashion industry, and the young designer—who was the first recipient of the Queen Elizabeth II Award for British Design in 2018—is facing the future with an outlook as bright as one of his signature prints.

In many ways, Quinn has been a leader in forward-thinking actions like putting sustainability and social responsibility at the forefront of his business; and this past February his London Fashion Week catwalk show took a genderless approach. It’s fitting that fluidity is championed by Quinn, given his admiration of the flower child generation. “There was a free spirit,” he says of the era.

But Quinn is hopeful that this current time, as full of flux and uncertainty as it is, will be as similarly revolutionary as the decades that serve as his historical influences. “It’s an exciting time in fashion in terms of how it’s presented, and what it means to be in fashion now,” he says. “As a team, we’re discussing what the best way forward is. And I think there’s going to be positive change when this is over. It’s exciting to be part of it.”