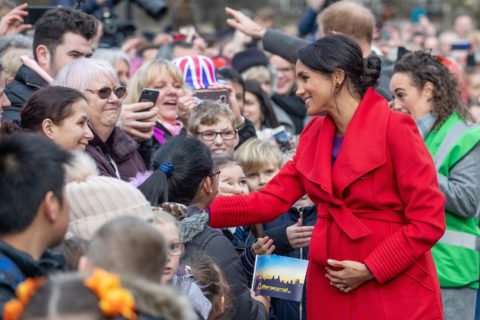 Looking Back at 10 Years of Sentaler Milestones, Including the “Meghan Coat”

As the Canadian outerwear brand celebrates its 10th anniversary, Bojana Sentaler reflects on milestones along the way.

It was a piece of advice from Karl Lagerfeld that got Bojana Sentaler into the fashion business. A graduate of the Schulich School of Business with a degree in marketing and finance, the Belgrade-born Canadian’s passion had always been design but she wasn’t quite confident enough to pursue it as a career.

“In 2008 I lived in Dubai for a year, and I worked in media,” she says, as we sip tea during London Fashion Week, where she’s showcasing her fall/winter 2019 collection for media. “One of the most amazing people that I interviewed was Karl Lagerfeld. At the time he was designing villas in Dubai and I remember chatting with him off the record after the interview, letting him know I love fashion and would love to be a fashion designer, but I don’t have a design background. And basically he really bluntly told me that you either have it or you don’t, and if you have it go for it.”

Holding on to that “little source of inspiration,” a germ of an idea was born when Sentaler visited Peru the following year.

“I spent half a year living in Lima and that’s where I discovered the alpaca fabric,” she recalls. “Peruvians are very proud of this material. I began researching it, and found out that it has microscopic air pockets that act as thermal insulators. So that’s why alpaca is very warm, but also very lightweight. And that was it, a light kind of [went on] and I ended up designing my first collection of seven coats while I was living in Lima.”

In the 10 years since, her alpaca wool coats have been seen on everyone from Sophie Gregoire Trudeau to Gigi Hadid to the Duchesses of Sussex and Cambridge. Meghan Markle, in particular, has become a de facto brand ambassador of sorts, having first discovered the brand while living in Toronto during her Suits run. She owns multiple Sentaler coats, bringing them out for significant official appearances, including her first Christmas outing with the royal family.

Dressed in shades of brown from head to toe, Markle topped off her subdued ensemble with a camel coat knotted at the waist. She wore a version of the same coat, in striking scarlet red this time, for her first public appearance of 2019. “She actually also owns the same coat in green,” says Sentaler. “She appeared in the green coat while she was living in Toronto. So I brought it back for the 10th anniversary collection.”

Perhaps it’s unsurprising that Markle’s style hasn’t changed significantly even as she settles into her high-profile new role in the global spotlight; her public appearances over the last year or so have seen her patronize many of the same brands she wore before marrying Prince Harry, with a focus on brands with a sustainable or ethical focus.

“She was very lovely and kind, and just very down-to-earth, which we can still see today,” Sentaler recalls of her first meeting with Markle, many years ago. While they know Markle owns multiple coats from their brand, it’s as much of a surprise to them when she dons one for a public appearance, as it is for everyone else.

“Usually, I find out through Twitter,” she laughs. “Somebody posts it and because of the identifiable details, the media already knows that it’s Sentaler, they’ll spot it right on. I feel so happy that even before we send out a press release, people know it’s a Sentaler. To any designer that’s really rewarding.”

Creating a brand with signature elements that are easily identifiable was a part of Sentaler’s vision from the start, whether it’s the ribbed detail on the sleeves or cuffs, the shawl collars, the knotted bow, or the square pockets. The buttons on all the coats are engraved corozo, an anti-scratchable, anti-breakable natural substance. Another element of the Sentaler ethos since its inception is the strict use of cruelty-free fur. The alpaca fabric for their coats is sourced from 3,000 to 5,000 metres above sea level in Peru where the alpaca animals are protected by the Peruvian government. The fur is obtained from shearing the animal every two to three years, and eventually when the animal dies, or if it dies prematurely from the extreme changes in temperature, the farmers can still profit from the pelt.

“A lot of designers are opting out of using fur now, so I’m really happy that from day one, from the day I launched Sentaler ten years ago, I have always used animal-friendly and cruelty-free fur,” says the designer. “I was never a person that wore fur; I love animals. But once I found out how alpaca fur is obtained, it’s something that I became very passionate about. It’s the most ethical, the way it’s sourced. The animals are not harmed at all.”

A focus on sourcing cruelty-free fur (or choosing to go fur-free entirely) is a definite recent shift in the fashion industry, as is customers’ demand for transparency.

A few years ago, Sentaler started a partnership with Sick Kids, a world-renowned Toronto hospital that provides care not just to Canadian children, but to kids all over the world. “I knew of the hospital, but until I became a mother I didn’t really know the extent to which they offered care. I know they have a goal to build a new hospital with new equipment. So I chose to build a partnership with them: proceeds from all sales of Sentaler accessories—the ribbed hats, gloves and scarves—go towards the foundation.” For the past two Christmases, she has also donated Sentaler hats to the hospital because their hypoallergenic nature makes them safe for kids with allergies to wool or cashmere.

For her 10th anniversary collection, Sentaler dove back into her archives, pulling out signature pieces that she wanted to reintroduce for 2019, like the Oversized Hooded Wrap Coat, the Long Wide Collar Wrap Coat (known as the “Meghan Coat”) and the Wrap Coat with Ribbed Sleeves (dubbed the “Kate Coat”). She also brought back hues like Mulberry and Army Green from previous seasons. Designing the collection gave her the opportunity to reflect, and look at her earliest efforts with fresh eyes. What was that like, the nostalgic process of going back to the start?

“Oh my god, it was so much fun,” she smiles. “I have a design studio at home, and I have pictures and inspiration on all four walls from the last 10 years. Everything is so close to my heart, and everything has a story. I remember the feeling I had when I designed a piece a few years ago, and the feeling I had when I designed the very first collection. It was really nice to discover that I still love those pieces.”