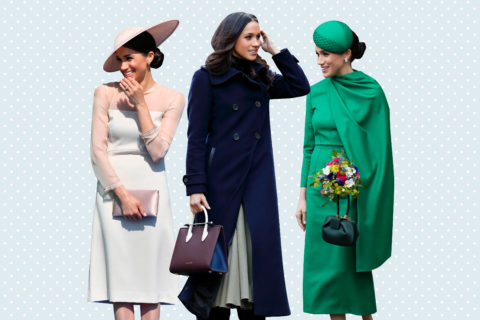 When it comes to the Duchess of Sussex’s style, it’s safe to say that sleek, minimalist and sophisticated are the pillars her wardrobe is built on. Her ensembles tend to be pared down, with rarely a busy print or fussy details in sight, and her accessories often follow suit. That said, her choices are far from boring. Her handbag game is strong, with interesting colours, fabrics and shapes dictating her selection. Also noteworthy is her tendency to avoid logo-laden designer bags. Though she isn’t averse to carrying the occasional Givenchy, Dior or Stella McCartney purse, Markle’s bags of choice tend to be smaller indie brands selected for their social or ethical messaging, sustainable practices or women-led design teams. Read on for the 10 under-the-radar handbag brands that have made an outing with the Duchess of Sussex.

1. Strathberry
Founded in Edinburgh, Scotland in 2013, Strathberry has made a mark for itself with its structured and sophisticated bag shapes. Handcrafted in Spain, the brand’s range of bags is identifiable by the sleek gold bar closure that can be found on each of its bags, regardless of style. Markle is clearly a big fan of the brand, because she owns three pieces from their collection—a navy and burgundy structured tote that she carried for her first official royal engagement in 2017; a petite bottle green crossbody bag that she wore on a visit to Edinburgh (where the Strathberry brand was founded) in 2018; and a no-fuss camel tote that she carried on a 2018 visit to Ireland.

2. Rejina Pyo
London-based Korean designer Rejina Pyo’s design ethos is all about sustainability and long-term wearability. To that end, her designs are classic and timeless but with a fresh, youthful spin. Think ruffled dresses, high-waisted skirts, slouchy blazers and statement accessories. The brand stays away from furs, exotic skins and non-responsibly sourced down or feathers, which aligns closely with Markle’s own value system and penchant for ethical brands. The handbag that Markle carried recently for an International Women’s Day event in London is the ‘Nane’ woven bag with signature knot strap from Pyo’s Spring/Summer 2020 collection.

3. Gabriela Hearst
This Uruguay-born, New York-based womenswear designer is a purveyor of slow fashion with a commitment to sustainability. 99% of her textiles are sustainable, with a focus on zero waste, upcycling and eco-conscious processes. The ‘Demi’ bag that the Duchess of Sussex carried on a recent outing in London is crafted from satin and consists of a distinctive round pouch with a structured top handle and rose gold turnlock closure. The Duchess owns the same bag in ‘Cognac’ leather as well.

Meghan Markle, The Duchess of Sussex, carries the Demi bag in emerald satin while attending the Commonwealth Day Service at Westminster Abbey #gabrielahearst

4. DeMellier
Markle tends to favour brands with a social or ethical message and DeMellier is no exception. For every bag purchased, the London-based label funds a set of lifesaving vaccines and treatments for children in need through their charity A Bag, A Life. Handcrafted in the south of Spain by local artisans, DeMellier handbags are made in limited quantities so as to minimize waste. For her first visit to Wales in 2018, the Duchess brightened up her head-to-toe black ensemble with the brand’s ‘Mini Venice’ bag in forest green.

Meghan Markle looking stunning wearing the @demellierlondon Mini Venice bag in forest green in Wales today. We are so honoured ❤️ The Mini Venice is available from the DeMellier website – link in our bio. #DeMellier #meghanmarkle #ABagALife

5. Montunas
Last October, for the annual WellChild Awards in London, Markle decided to re-wear two items from her closet: the deep green dress from Parosh that she first wore to announce her engagement back in 2017, and the camel Sentaler coat she wore on Christmas in 2017. She gave the outfit a fresh spin by pairing it with a statement bag by British brand Montunas. The box-shaped ‘Mini Guaria’ bag with a tortoise acetate body and botanical-print scarf handle instantly took centre stage amidst the other minimalist elements of her ensemble, and “sold out within hours,” according to co-founder Amanda Ruge.

The Duchess of Sussex wearing our Mini Guaria

6. Cuyana
If there’s one brand that Markle seems to be a repeat customer of, it’s San Francisco-based Cuyana. The Duchess has been spotted carrying their black Classic Leather Tote on more than one occasion, and it’s rumoured that she gifted the bag to the friends who attended her baby shower in New York. Her own tote is monogrammed with a simple M in gold lettering, as is another Cuyana bag she owns—the Le Sud Weekender tote. She’s also been spotted carrying the brand’s blush-toned Chain Saddle Bag while in Australia on royal tour in 2018.

The Duchess of Sussex, Meghan Markle, with our Chain Saddle Bag. #essentialwomen #fewerbetter * We have some more bags in stores. Sign up online through the link in our profile to be notified via email.

7. Charlotte Elizabeth
For her visit to Northern Ireland with Prince Harry in 2018, Markle selected a bag by a British brand supported by The Prince’s Trust, a charity founded by Prince Charles in 1976 to support disadvantaged youth in the UK. Charlotte Elizabeth Jones, who was paralyzed for several months due to a debilitating health condition, started the brand from the confines of her bed at the age of 21 with resources and skills learned from The Prince’s Trust. The Duchess chose the brand’s ‘Bloomsbury’ bag in Chestnut for her outing, but it’s also available in hues like oxblood, pale pink, coral and chocolate.

Our sellout Chestnut Bloomsbury, as worn by The Duchess of Sussex in 2018, is back in stock. Head to our site to shop now to avoid missing out. Hurry, they sell like hot cakes! ??

8. Oroton
Much has been written about the ‘Markle Effect,’ which gives brands worn by the Duchess a huge boost in sales and visibility, but in this particular case it might have actually saved a brand from going bankrupt. After Markle carried a black-and-white striped crossbody bag by Australian label Oroton on an official engagement with Prince Harry in London, the bag instantly sold out online, prompting customers to place pre-orders for when the piece came back in stock. Quite an about-turn from the previous year, when Oroton had announced it was entering into “voluntary admission,” signalling early-onset bankruptcy, following a sales slump. Other styles offered by the Aussie brand include straw satchels, sleek baguette bags and jacquard bucket bags.

9. Wilbur & Gussie
Markle’s been spotted with a sleek blush-hued clutch by this British brand on more than one occasion. In 2018 alone, she carried the clutch three times—in April for a memorial service; in May at Prince Charles’ 70th birthday party; and in December during her visit to a residential nursing home in Twickenham, England. The ‘Charlie’ clutch she carried is the signature style of the Wilbur and Gussie collection. Though the Duchess’s specific piece is made from 100% silk, the model can be customized by selecting from an assortment of fabric colours and brooches to adorn the flap. Markle’s sister-in-law Kate Middleton is also a fan; she owns it in grey silk as well as a glittery gold.
​

10. Kayu
This ethical and sustainable brand may be headquartered in California but their bags are handmade by women cooperatives in the Philippines, Indonesia and Malaysia, using indigenous techniques that have been passed down through the generations. Kayu means “wood” in Malay and is a nod to the nature-based origins of the brand’s handbags, which are made from materials like organic straw, wood and shell. Markle carried their ‘Anna’ straw clutch for the first time in 2018, while attending the wedding of Prince Harry’s childhood friend, Charlie van Straubenzee, and a few months later while disembarking in Fiji on a royal tour with her husband.

Meghan Markle, duchess of Sussex, carrying our Anna clutch as she arrives in Fiji.

Images via Getty. Design by Kayleen Dicuangco.
Get the best of FASHION in your inbox Thanks for signing up!
The latest fashion, beauty and celeb news delivered right to your email #FASHIONforall Now, check your inbox to complete your subscription
We won’t ever use your email address for anything else
Want even more FASHION? Follow us on social media.