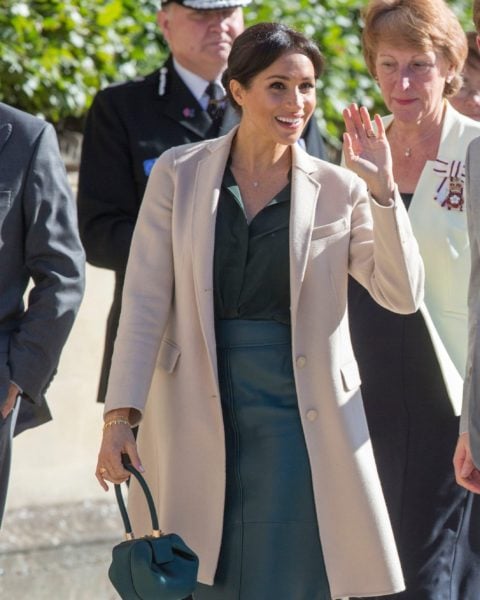 5 Things to Know About Gabriela Hearst, the Designer Behind Meghan Markle’s ‘Demi’ Bag

Gabriela Hearst is one of those fashion designers whose name is frequently used in conjunction with words like ‘cult’ and ‘insider.’ Which is to say she might not be a household name like, oh, Marc Jacobs or Stella McCartney, but has quietly cemented her place within the fashion community, amassing a loyal clientele sans fanfare. Her approach to slow fashion, with an emphasis on high-quality, luxurious fabrics, has found favour with—yes—fashion insiders, and earned her—yes—a cult following. For a label that launched just three years ago, she has made some very large strides in a very short time. Read on for a few things to know about the New York-based designer whose handbag Meghan Markle just carried on a royal engagement in Sussex, most certainly shattering whatever under-the-radar status she had before.

1. She grew up on a ranch in Uruguay, which she now runs
New York has been Hearst’s home for over a decade (she lives in the West Village with her husband, publishing scion Austin Hearst, and their children) but she goes back several times a year to the ranch in Uruguay where she grew up, and which her father bequeathed to her upon his death in 2011. “It really formed a very specific aesthetic and point of view,” Hearst tells MatchesFashion.com. “Growing up in a remote landscape with objects and structures that were made to last, quality was a needed characteristic while opulence was not. Things needed to last from a utilitarian perspective and nothing got thrown out – things were re-purposed. The objects and my surroundings had character, formed by the lives that were lived and the passing of time.”

2. Sustainability lies at the heart of her brand
Given her upbringing and connection to nature, it shouldn’t come as a surprise that sustainability forms the crux of her eponymous label. 99% of her textiles are sustainable, reports Financial Times, and her commitment to zero waste, upcycling and eco-conscious processes is well-documented. She only uses certified natural fibres and viscose for her designs; utilizes leftover materials like cashmere and silk from previous collections for her accessories; and uses compostable packaging for the brand’s shipments. The company also aims to be plastic-free by 2019. “The two things I ask about every decision are: ‘is this sustainable and environmentally friendly?’ and ‘is this good for the long-term view?’ Because this is an endurance race,” she tells the FT.

3. She’s also a philanthropist
Hearst has worked with several non-profit organizations over the years to raise both money and awareness for their causes. In 2016, she collaborated with Tod’s on a limited edition sneaker; 20% of the proceeds from its sales went to Save the Children (where she now serves on the Board of Trustees). Last year, she produced a limited run of ovary-embroidered sweaters, the profits of which went towards Planned Parenthood. She also partnered with Net-a-Porter and Bergdorf Goodman, making her handbag collection available for online purchase for one week only, in order to raise awareness about the terrible drought in Kenya.

A year ago exactly to date, I had the honor to accompany Carolyn Miles CEO of @savethechildren to Turkana, Kenya and experience first hand the damage that the severe drought (climate change) had and still has on millons of people at risk of famine. I was so fired up by what I saw as well as witnessing the determination of the Turkana mothers to have their children survive, that it propelled my team and I on a mission. To raise 600K that would be able to cover basic feeding for 1000 families. While it was a drop in the bucket of what it is needed, it was a great challange for us to achieve. What an amazing gift it is to be able to help other people and further ignite the ambition to do more. Thank you #SaveTheChildren for all you do for the mothers and children of the world.

4. Her first handbag, the Nina, has spawned crazy waiting lists
Only 20 pieces were initially produced of the Nina bag, which Hearst launched back in October 2015 in just two colours—black and cognac. “I did a limited edition of 20 bags; I didn’t do it for commerce, I just wanted to launch it,” she tells Vogue. “And I gave them to friends of mine and to women I work with. The woman who makes my shoes has it. And Brie Larson, the actress, has it.” The bag quickly gained cult status, racking up a waiting list in just a few short months. The bag now comes in two sizes and a slew of different colours and materials, from denim to silk to crocodile leather, but can be ordered only on her website, where customers need to sign up via their email address to get on the waiting list. If you want to get your hands on it ASAP, you’re in luck because her line of handbags—including the brand new lunchbox-style Patsy—is popping up for two weeks only on Net-a-Porter, from October 1 to 15. “They represent an amazing window,” Hearst tells the FT. “They have the bag for just two weeks, and it’s going to give it tremendous exposure. Because of the amount of copies happening, it’s good to open the door a little and then close it, so that people can access the products in the right way, and understand what they are.”

“The research process is one of my favorite parts. My motto is to understand our history to know where we came from and where we are going. For the Patsy, I was inspired by the lunchboxes of women entering the work force during the 1940s.” Gabriela Hearst Authentic Handbags with Block Chain technology Available for two weeks only @netaporter (Patsy Crocodile coming soon…)

5. Meghan Markle’s not her only A-list fan
Hearst created a custom-made dress for Laura Dern for the 2017 Met Gala, and has also found fans in celebs like Anne Hathaway, Selena Gomez, Emma Stone and Gugu Mbatha-Raw. Upon awarding Hearst the 2017/18 International Woolmark Prize, Victoria Beckham, one of the judges involved in the selection process, said, “I was very much in support of Gabriela. For me, she is a worthy winner. I love what she does and she’s clearly very talented. I like her eye, she has great products and she’s a strong woman. I have a huge amount of respect for her.”

Photography via REX/Shutterstock
Get the best of FASHION in your inbox Thanks for signing up!
The latest fashion, beauty and celeb news delivered right to your email #FASHIONforall Now, check your inbox to complete your subscription
We won’t ever use your email address for anything else
Want even more FASHION? Follow us on social media.