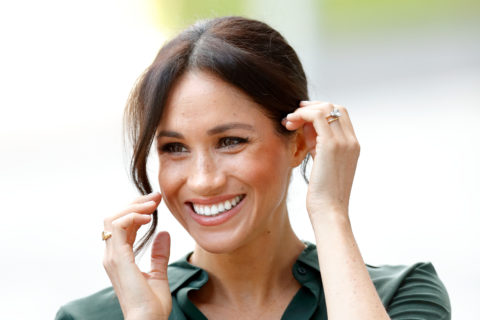 Meghan Markle Confirms She Will Vote in the Upcoming US Election

In an unprecedented and history-making move for a member of a royal family, Meghan Markle has confirmed she will be voting the 2020 US Presidential election.

Historically, members of the British royal family have not voted in elections, though as noted by People, there is nothing expressly stopping any member from doing so. On the royal family’s website, it notes that The Queen “has to remain strictly neutral with respect to political matters. By convention, The Queen does not vote or stand for election, however Her Majesty does have important ceremonial and formal roles in relation to the government of the UK.”

Speaking with Marie Claire about the decision, the Duchess of Sussex said, “I know what it’s like to have a voice, and also what it’s like to feel voiceless. I also know that so many men and women have put their lives on the line for us to be heard. And that opportunity, that fundamental right, is in our ability to exercise our right to vote and to make all of our voices heard.” She continued, “One of my favourite quotes, and one that my husband and I have referred to often, is from Kate Sheppard, a leader in the suffragist movement in New Zealand, who said, ‘Do not think your single vote does not matter much. The rain that refreshes the parched ground is made up of single drops.’ That is why I vote.”

Additionally, Meghan is also gearing up to interview Emily Ramshaw, the founder of non-profit newsroom The 19th* at a virtual summit this week focused on celebrating the centennial of women’s right to vote in the US, as well as the work that remains to be done.

The news was followed by confirmation this morning from a representative for the pair that Harry, Meghan and Archie have moved into a new house in Santa Barbara, California. “The Duke and Duchess of Sussex moved into their family home in July of this year.” They have settled into the quiet privacy of their community since their arrival and hope that this will be respected for their neighbours, as well as for them as a family.”

Photo by Max Mumby/Indigo/Getty Images
Get the best of FASHION in your inbox Thanks for signing up!
The latest fashion, beauty and celeb news delivered right to your email #FASHIONforall Now, check your inbox to complete your subscription
We won’t ever use your email address for anything else
Want even more FASHION? Follow us on social media.