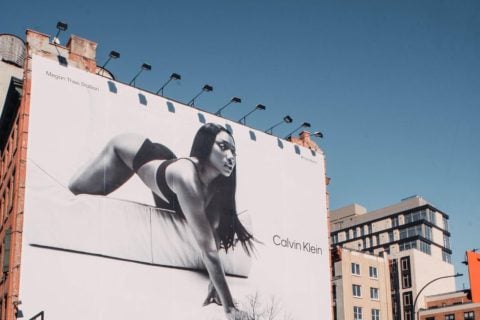 In one of the campaign photos, the Grammy-nominated rapper models looks from the brand’s seamless support underwear collection. In another, she poses in a matching bra and panty set.

One campaign video starts off with Megan saying: “I’ve been meaning to ask you” and continues with other campaign stars asking introspective questions about vulnerability and joy. “We don’t have to make people see the light,” Toronto-born activist Janaya Future Khan says. “We only have to be the light.”

On March 3, Megan posted several photos of her Calvin Klein billboards. Another post shows the “Body” rapper posing in front of them at night.

This is Megan’s first time modelling for Calvin Klein, and Elordi’s second — he starred alongside Naomi Campbell and Bella Hadid in the brand’s #MYCALVINS IRL Campaign in 2019.

Photography via @theestallion/Instagram
Get the best of FASHION in your inbox Thanks for signing up!
The latest fashion, beauty and celeb news delivered right to your email #FASHIONforall Now, check your inbox to complete your subscription
We won’t ever use your email address for anything else
Want even more FASHION? Follow us on social media.