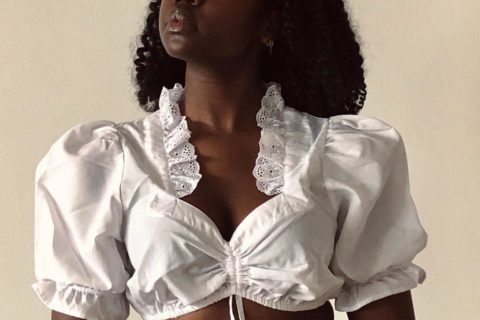 “You don’t really think about the consequences that your shopping habits have.”

While those of us in North America glean a perspective on our rampant consumerism based largely on reports released by activist groups, vintage entrepreneur Orpah Wavomba, who is originally from Kenya, has a very different–and dire–understanding of our over-consumption.

“When I was younger, my cousin and friends and I loved going out to find unique pieces that showed our individual style,” she recalls of seeking out mitumba, the Swahili word for second-hand. “The way the items are sold is that they come in massive, plastic-wrapped bails of clothing. The older I got, the more I started to learn about fast fashion. And with moving to Canada and experiencing the ‘buy now, donate later’ mentality, the more I found myself thinking about the effects of the fashion industry.”

Wavomba notes that Kenya had a once-thriving local fashion economy that became depressed as imported second-hand and unused clothing was off-loaded to different regions around the world. “In 2018, [Kenya] imported close to $21 million dollars in clothing from Canada,” she says. “And because a lot of these items were cheaply made, they still ended up in landfills.”

Now based in Toronto, Wavomba has launched a second-hand e-commerce business, Mode de Mit, that mixes her love of fashion with her interest in environmental and ethical issues, adding that her perception has changed when it comes to what and how we buy. “You don’t really think about the consequences [that] your shopping habits have,” she notes.

Mode de Mit’s current wares have a rather romantic flavour–think blouses with delicate embroidery and flowing slips. “I’m a bit of a modern romantic, but it depends on the day you ask me,” Wavomba says of her selections for the Etsy-based business. “My foremost focus is to find garments that are made of natural fibres, and then I think about the direction I want the pieces to be in.”

She says that she’s always been heavily inspired by the pieces prevalent in the nineties. “I make my husband watch runway shows with me,” she says with a laugh. Versace and Christian Dior’s collections are her favourites from the time period, as are the ‘supers’ Naomi Campbell, Yasmeen Ghauri and Tyra Banks. “I don’t have the right words to describe it,” Wavomba says of her devotion to the decade and its fashion icons. “It transports you into this time where women were like goddesses.”

But Wavomba’s drive doesn’t solely rely on sourcing garments and accessories that speak to her love of style from eras past; she’s also committed to using Mode de Mit as a transformative shopping experience in every possible way. For example, she uses compostable packaging to ship pieces she’s sold. “It’s important for me to monitor the carbon footprint of the store,” she says. “Whatever way I get [an item] to my customer, I want to make sure it’s not just being thrown into bins. The packaging is something they can put in the garden or compost bin or soil of their indoor plants, and it disappears in six weeks.”

She’s also keenly aware of the negative societal impact of fashion, addressing the fact that “fast fashion garment workers are disproportionately women of colour; they earn peanuts for the work that they do.” Since the Black Lives Matter movement has drawn more customers to her site in recent months, she hope that more awareness of this statistic–and the overall importance of continually sustaining Black-owned businesses–will grow. As she so rightly puts it: “The intersectionality between people and the planet can’t be ignored.”

Photography courtesy of Mode de Mit.
Get the best of FASHION in your inbox Thanks for signing up!
The latest fashion, beauty and celeb news delivered right to your email #FASHIONforall Now, check your inbox to complete your subscription
We won’t ever use your email address for anything else
Want even more FASHION? Follow us on social media.