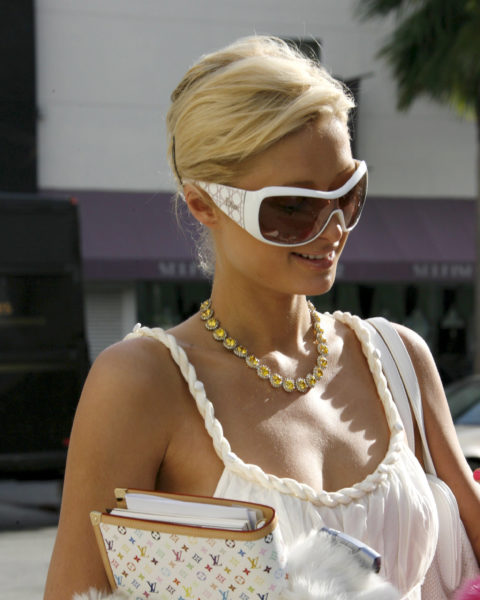 "As I type this, I have about 10 tabs featuring eBay watchlists for a Multicolore LV Speedy open on my computer."

The early 2000s were engulfed in an epidemic of low rise pants, worn-out Ugg boots and Ed Hardy clothes. Though many look back on the early aughts as one of the worst decades fashion has ever borne witness to (evidenced by headlines like “15 Trends From the Early 2000s You Wouldn’t be Caught Dead In Today” and “29 Trends We Loved In The ’00s That Look Terrible Now”), I have nothing but respect for the era that brought us endless paparazzi pictures of Paris Hilton with a venti Starbucks latte in one hand, Teacup Chihuahua in the other. Perhaps this reverence stems from the fact that at the time, I was still caught up in playing with Polly Pockets – I was born in 2002 –so everything from that era struck me as grown-up and impossibly cool. If it were socially acceptable, I would show up to work every day in a Juicy Couture tracksuit and a Von Dutch trucker hat.

When ur sugar daddy comes thru

But one item of early aughts fashion still captivates my imagination more than any other: the Takashi Murakami x Louis Vuitton bags. Emblazoned with voluptuous cartoon cherries and rainbow monogram drizzled on conrasting backgrounds, they demonstrated that high fashion didn’t have to take itself, well, so seriously. Upon the release of the collection in 2002, the bags, shoes and accessories made their way onto the shoulders of just about every 00’s icon — and subsequently, the wishlist of every preteen girl who worshipped them. Though I was stroller-bound when the collection first appeared, something about the bags make me want to smile, and say ‘That’s hot’ with every exhale.

Marc Jacobs, Louis Vuitton’s creative director at the time, described the collection as a “monumental marriage between art and business.”In 2018, Murakami admitted that he had never heard of Louis Vuitton until the collaboration, and only agreed to do it after one of his assistants suggested that “ Louis Vuitton is one of the dreams of Japanese women.”

Although the artist had previously collaborated with designers such as Issey Miyake, Takashi Murakami’s reinterpretation of Vuitton bags helped lay the groundwork for today’s  flourishing collaboration culture.The fusion of the art world with the fashion world also paved the way for artists like Sylvie Fleury, Yayoi Kusama and Jeff Koons to create their own artistic interpretations of what a Louis Vuitton bag could be.

I can directly trace my current obsession with handbags back to 2002, when the kid-friendly Murakami patterns were first released.  I have early memories of rummaging through my mother’s closet to “borrow” her white Multicolore Speedy 30, and running back into my room to admire myself in the mirror totally convinced I was Hannah Montana. (All while the soundtrack to High School Musical played off of my pink Sony CD player in the background.) As I got older, I dreamed of one day walking into the LV store and purchasing a piece from this collection for myself. I imagined it as a milestone of adulthood, marking financial independence and an abundance of disposable income.

But in 2015, my childhood dream of one day purchasing a Murakami bag was suddenly crushed. The brand discontinued the line two years after Marc Jacobs left his post as creative director, and the accessories vanished from stores across the globe. Louis Vuitton refused to comment on the decision to pull the line, issuing a statement  they would like to “look forward.”

If the nostalgia that one feels towards a particular item trumps its current status of trendiness, then it should by all means be worn with pride and dignity.

Though many early 2000s handbags have experiences a resurgene of interest thanks to strategic reissues – the Dior saddle bag, the Fendi baguette — the LV rainbow monogram hasn’t quite hit the nostalgia cycle yet. (Though Kylie Jenner, Travis Scott and Bella Hadid have been spotted carrying the bags, and last Christmas Kim Kardashian sourced 8 of the bags from Japan to give to her cousins as gifts.) But to me, ever-changing trends are not the point of fashion. I prefer to think of fashion as centered around emotional connections to style and culture, and if the nostalgia that one feels towards a particular item trumps its current status of trendiness, then it should by all means be worn with pride and dignity.

When Mary-Kate Olsen was photographed toting a beaten and bruised lime-green Balenciaga Motorcycle bag in 2016, complete with red lipstick stains smudged along the bottom, purse forums erupted with mixed reactions. Some people admired the fact that she had brought a handbag bag out of her closet so many years later, and others were quick to say that she was off-trend and out of touch with style. But I like to imagine it was this sense of nostalgia that drove her to pull it out of her closet again.

As I type this, I have about 10 tabs featuring eBay watchlists for a Multicolore LV Speedy open on my computer. I am drenched in sadness that this collection is no longer. But recently, a sliver of hope came to me in the form of Louis Vuitton’s recently inaugurated creative director for menswear, Virgil Abloh. Abloh is a close friend of Takashi Murakami, since both of them designed for Kanye West, and all three have collaborated with one another in some way. “Takashi and I are extremely aware of the era we’re living in, and we’re constantly trying to translate it into our work. This is what brought us together,” he once told Vogue.

Photo by MB Pictures/Shutterstock
Get the best of FASHION in your inbox Thanks for signing up!
The latest fashion, beauty and celeb news delivered right to your email #FASHIONforall Now, check your inbox to complete your subscription
We won’t ever use your email address for anything else
Want even more FASHION? Follow us on social media.