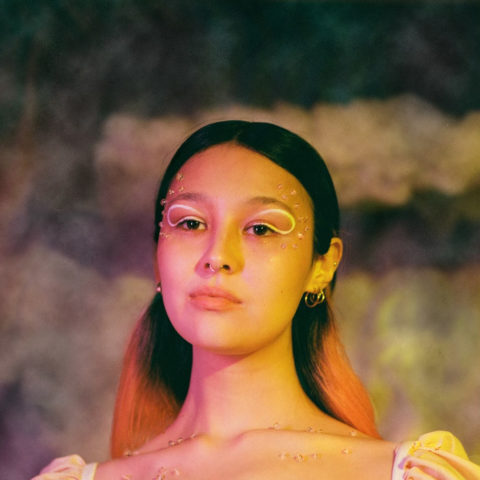 The indie pop artist connects with her online following through her unique fashion sense and entrancing music.

Luna Li is inspired by nature, and is particularly drawn to the moon. “The moon is so powerful, and it has a feminine energy which resonates with me,” she says. “I think the imagery of the light shining through the dark is also just really beautiful.”  Hannah Bussiere, the Korean-Canadian musician behind Luna Li, says she wanted a stage name she could “step into” to take on an unapologetic, confident presence when performing. Bussiere feels grounded when she’s in the presence of the moon (or “luna” in Italian and Spanish) — her dreamy melodies and self-imposed nickname “moon fairy” come from this source of creativity — and so the name Luna Li was born.

In March 2020, after COVID-19 first hit, Bussiere started posting “jam videos” to her social media — clips of her in her bedroom playing different instruments, which she then cuts and layers to create pop melodies. From these videos, Bussiere cultivated a large online following. And for good reason — the multi-instrumental musician’s entrancing tunes and vibrant fashion looks speak to her individuality as an artist.

The Toronto-born musician chatted with FASHION about coming up in the music scene, her style philosophy and her vision for the “Luna Li project,” which is how Bussiere refers to her musical alter ego.

Bussiere always wanted to make music. With a classical training background, she plays myriad instruments in her songs. From harp to violin to electric guitar — and of course vocals — each of Luna Li’s songs is its own distinct symphony. But before she started as Luna Li, Bussiere hesitated to pursue indie pop because of the lack of representation for Asian women within the genre.

“When I was trying to find my path, it was a little tricky because I started in the classical world, and I felt that there was a lot of representation [for me] there. I initially started to pursue that side of things because that’s where I saw myself, and not so much in the Toronto indie scene,” she says.

Feeling like she wasn’t yet where she wanted to be, Bussiere decided to leave the classical world and venture into Toronto’s music scene anyway. “Despite not always feeling like I fit in or seeing myself in that scene, I started to just realize that I was going to be the first one there to represent myself and I had a lot of support, which was great,” she says.

Luna Li’s music is optimistic, and her style reflects this. With lots of patterns, bright colours and crafty accessories, the 24-year-old artist says having a fun wardrobe plays into her overall message of positivity. She notes that her style is ever-changing; she likes to have elements that feel magical, while still incorporating a bit of an edge.

And, crucially, she tries not to let restrictive fashion rules impact the way she dresses, building her unique look with pieces that move her, instead of following trends. “Anything can be cool if it feels authentic,” she says. “So I love to bend the rules and just do what I feel is the most exciting to me at the moment.”

She cites musicians Raveena and Solange as her fashion inspirations. Raveena often mixes texture and colour combos to create surrealistic outfits that match her genre-blurring sound. Solange, known for her singular style, never shies away from artful statement pieces.

While Luna Li’s outfits are intentionally put together, Bussiere’s “off duty” style is more laidback. “In terms of my personal style, I try to shop sustainably,” she says. “I love to go thrifting, and there’s a great community for that in Toronto. There are so many shops and [I try to] also support local businesses.”

Blending the worlds of Luna Li and Hannah Bussiere

Doing performances mainly from her room for the past year has blurred the lines between Bussiere and Luna Li. She says this overlap has manifested itself in her style, because she’s no longer carefully curating looks to step on a stage and perform. It’s also impacted her songs. “I think my music has gotten more personal and more vulnerable,” she reflects. “The blurring of the lines has created a more authentic story.”

Working with a team of all women produces a magical feeling, Bussiere says. “It’s something really, really special to me.”

“Like 99 percent of the Luna Li visuals have all been thought of by other women. When I first entered the scene, there wasn’t very many women working and creating, and I made this pledge to myself to make sure that I work with other women and try to uplift and support other women as I go through my career,” she says. “I also feel that there is this essence of femininity that is a part of the Luna Li project, that other women are able to get behind and understand and help push the vision to where I want it to go.”

When it comes to things like photoshoots and music videos for Luna Li, Bussiere is focused on combatting the male gaze. “When I first started out, I was worried about being judged and men being condescending about my music, and that kind of thing. And I think that really inhibited me at first, because I was always trying to prove myself, which was exhausting. So recently, I’ve been taking a step back from that, and thinking about how I can present myself the most authentically, and what feels the best to me,” she explains. “When people can be authentic, that is the most important thing. But I can’t be bothered anymore to be worried about being perceived by men.”

Bussiere hopes to be the representation that she didn’t have growing up. “The most meaningful to me would be to have my music resonate with young Asian women who are growing up in North America, because that’s directly my experience — and there’s a lot of obstacles to face,” she says. “I hope that they can see themselves represented in my music and can feel seen or heard.”

Luna Li’s layered orchestral arrangements paired with her distinct voice radiate a feeling of freedom, and it’s no surprise that her music has resonated with people through such an isolating time. Following her most recent single “Alone But Not Lonely,” the artist will be releasing a full-length project later this year. Until then, keep up with Luna Li on Instagram, Twitter, or TikTok — and maybe even have your timeline blessed by one of her ethereal jam videos.