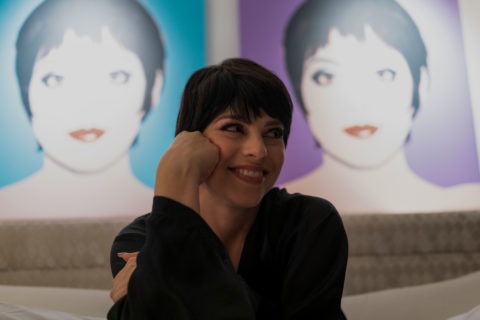 The actor who portrays Minnelli in the Netflix limited series 'Halston' on how she prepared for the iconic role — and got immersed in Halston's fashion designs.

Before she was cast as legendary Broadway star Liza Minnelli in the Netflix limited series, Halston, actor Krysta Rodriguez was familiar with fashion designer Roy Halston’s persona, but that was the extent of it. “I didn’t know the whole story of Halston’s journey and legacy, and what led to his anonymity as we see him nowadays,” she says. Rodriguez knew that Halston — portrayed by Scottish actor Ewan McGregor — and Minnelli were from the same era but she had no idea of their close-knit friendship and the common threads that held them together. “I didn’t realize how deeply enmeshed they were in each other’s lives and careers, and in actually creating each other as American icons.”

For her own part, Rodriguez was already well-versed in all things Minnelli by the time she landed the role. The actor has a Broadway background and Minnelli has long been lauded in the Broadway world (she has four Tony awards). In fact, Rodriguez was doing an off-Broadway play that was in intermission when she learned that she had been cast to play Minnelli. “But I still had to research her because you can’t possibly know enough about someone to think about playing until you do that research,” she tells me from her home in New York City. Rodriguez began immersing herself in everything Minnelli. “For months, there wasn’t a day that went by when I wasn’t reading something or watching something for months.”

Still, channeling Minnelli for the series — streaming now — wasn’t something that came easily to Rodriguez. “I was very cautious and nervous about articulating the part properly,” she explains. “You have so many chances to get things right in the theatre, and there are so many roles that you get to create from scratch because no one really has a point of reference. But that wasn’t the case with Liza: not only is she a legend but she is a living legend. The weight of what I was doing stayed with me the entire time.”

Comfort in the creative process included the need to feel at home in Halston’s designs. “This is why, for many reasons, the costume designers wanted to create everything from scratch,” she explains. “Most everything was recreated. Some of Halson’s pieces are in museums while other designs don’t exist anymore. We wanted to create designs afresh so that they felt authentic to the people wearing them.”

The buttercup-yellow pantsuit that Rodriguez wears in the scene where Minnelli marries second husband Jack Haley Jr., for example, was a recreation, designed to fit her meticulously. “The suit felt more authentic to me because had I put on the actual Halston suit I would have looked like someone wearing the costume,” Rodriguez tells me. There is a pantsuit that Minnelli wears in Studio 54 — the legendary New York City nightclub where Halston and Minnelli, among other friends such as jewellery designer Elsa Peretti and model Bianca Jagger were fixtures — that was in a museum and couldn’t be used. “The famous fashion designer Naeem Khan — who was Halston’s protégé in the seventies — recreated that pantsuit from the original pattern of Halston that he had. Because of COVID, he had the time to do it,” she says. “It is as meticulous and close as you can get without having the original.”

Rodriguez remembers one moment when the genius of Halston especially struck her. “I was in a fitting and I happened to see some of the patterns,” she tells me. “I was in awe. The patterns were basically like decorative origami.” Rodriguez was taken by how a lot of Halston’s dresses were minimalist in design but complex in construction. “You can do the whole dress with one theme and I don’t think I understood what it takes to make a dress like that. It feels wrapped around, but it’s so very meticulously thought out and quite a mathematical process. To make something intricate look so effortless takes a lot of mental gymnastics, not to mention very deft fingers.”

Rodriguez says that while some of Halston’s pieces (a formal caftan, for instance) might not be worn as readily by women today, for the most part his designs are timeless. “I think what makes his fashion so classic is that they are meant for all kinds of women’s bodies. He was very deliberate about dressing all shapes and sizes and that’s what kept him universal for as long as it did. He brought fashion to the masses in a way that wasn’t really done before him.”

In this day and age, Rodriguez believes it’s very difficult to have a designer as ubiquitous as Halston. “It could be that the era of designers like Halston is gone forever,” she says. “That’s not to say that designers today don’t have a great impact. Of course they do. But it’s like television. We used to be a society where everyone would gather around one program. But now we’re heading to a place where we all get our own individual television network. I’m being hyperbolic but with social media the influence is so targeted that it’s almost impossible to have everyone look at the same thing at the same time.” But in the sartorial seventies, everyone was looking at Halston.

Since the series wrapped, Rodriguez has found herself looking to Halston once again. “I launched my interior design company Curated by Krysta Rodriguez last week, and I was inspired by Halston and Minnelli and their 1970s design aesthetic so much that it influenced my own design style,” she says. Indeed, Halston himself was heralded as a household name having trademarked everything from perfumes to interiors before he lost the rights to design under his name.

“We say this a lot and it’s true: Halston was the original influencer,” says Rodriguez. “He put his name on everything. And money was one only part of that equation: I think he just loved showing off and he loved being good at a lot of things. It was a real high for him to be the arbiter of taste in every arena.” She pauses, then adds, “And he was.”

Photography courtesy of Netflix Canada
Get the best of FASHION in your inbox Thanks for signing up!
The latest fashion, beauty and celeb news delivered right to your email #FASHIONforall Now, check your inbox to complete your subscription
We won’t ever use your email address for anything else
Want even more FASHION? Follow us on social media.