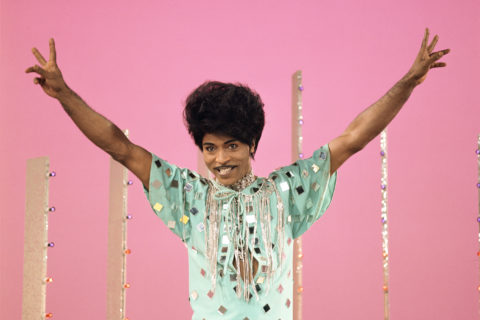 The flamboyant musician leaves a legacy of gender fluid looks behind.

He was born Richard Wayne Penniman, but we knew him as Little Richard. We also knew him as “the architect of rock and roll”—the person who brought upbeat, exciting music to the masses in a way they’d never heard, or seen, before. And for that reason, we should know Little Richard as one of the original pioneers of gender fluid fashion. Before Billy Porter, who played him in the miniseries Shake, Rattle and Roll in 1999. Before Prince and his purple reign. Before David Bowie and Aladdin Sane. Little Richard, who passed away this weekend at the age of 87, rocked so they could run.

When Little Richard emerged on the music scene in the 1950s, he wasn’t the amped-up exhibitionist that’s perhaps most familiar to us. Sure, he wore snappier examples of the popular suiting styles of the time, but there wasn’t glitter applied just yet. There was, though, a wavy pompadour; darkened, elegant eyebrows; eyes with just a slight kohl enhancement; and a moustache unrivalled in its manicured state. All rarefied and exciting hints at what was to come next.

As his stardom throughout the decade progressed, with his fame came the flashiness that has since influenced not only fellow performers like Jimi Hendrix, Keith Richards, Steve Lacy and A$AP Rocky; designers from Jonathan Anderson (see his glitzy Loewe gowns for the fall 2020 season) to Alejandro Gómez Palomo of the ultra-glam brand Palomo Spain are indebted to Little Richard’s DGAF approach to dressing.

During an appearance on singer-songwriter Glen Campbell’s popular television show in 1971, Little Richard’s seafoam green ensemble—which boasted silvery fringing and mirrored embellishment—made waves for being something more likely to be worn by divas of the time; Cher or Diana Ross, perhaps. There were his rhinestone-splashed ponchos, skin-tight satin trousers and collar necklaces which gave way to decadent jackets that would’ve been the dress code of a Baroque royal’s court, if the court was situated on the Las Vegas strip.

These pieces were all part of an aesthetic so unique and powerful it became a preoccupation for many of those who interacted with him. But Little Richard took each question as an opportunity to highlight how important it is to be an individual, and to dance to the beat of one’s own drum. In a 1972 interview, when asked about wearing makeup, Little Richard responded that it was like toasting bread or “adding sugar to your coffee—you’re supposed to add a little touch to it,” he grinned. A truly relatable way to imply sartorial rules only exist to be broken.

His was the kind of stylistic freedom that we endeavour to embrace and champion today, some fifty years after he entered pop culture’s collective consciousness. And it’s a gift he’s given us all as we’re left to comb through his catalogue of songs and style; something to keep in mind as we strive to adopt a more diverse, expressive attitude towards dressing. Little Richard’s most memorable outfits always veered to the extreme but never wore him. His exuberant personality and even livelier performances ensured that while the looks took centre stage, they never stole the show. In other words, wear what makes you happy and the other winning elements of your inner self will shine through.