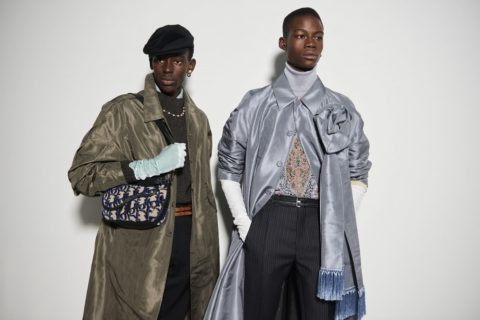 What the recent collections tell us about the future of fashion.

Gender neutral fashion is becoming a more widely acknowledged concept now that a myriad of brands hock wares that are deemed ‘unisex’. But a glance at the recent menswear shows offers an alternative approach to the idea of what it’s like to dress in an non-gender specific way.

For fall/winter 2020, the message is that it’s not about wearing clothing that’s so bereft of shape or detail that it’s categorized as ‘androgynous’. Instead, it’s about designers and labels embracing gendered design conventions and proposing that anyone could in fact wear them.

Let’s consider the oft-relied on notion of un-gendered dressing being shorthand for sack-like garments that don’t imply any of the stereotypical notions of what ‘masculine’ or ‘feminine’ apparel looks like—those pieces that come in neutral tones, and feature nary a speck of glitter or swatch of lace. In contrast, the runways of Rick Owens, Dior Homme, and Louis Vuitton (to name a few), offered an array of pieces that posses what many would deem to be feminized aspects. Ruffled sleeves, tight knitted dresses, velvet evening gloves and pearl embellishments were all ‘feminine’ touches presented in collections created for a male-identifying audience.

“The inclusion of conventionally feminized items in menswear suggests the continued crossing of gender boundaries in fashion and signals that menswear designers are continuing to advocate for a more inclusive understanding of masculinity, one that welcomes and embraces femininity rather than defining itself in opposition to it,” says Dr. Ben Barry, associate professor of Equity, Diversity and Inclusion at the School of Fashion and founding director of the Centre for Fashion Diversity & Social Change at Toronto’s Ryerson University. Indeed, in the way that suiting has been adopted in womenswear for many decades (although it’s often regarded as a ‘masculine’ way of dressing), today’s designers seemingly want to do away with the constraints of what their work should look like depending on their customer’s gender.

For example, Jonathan Anderson—who helms not only the JW Anderson brand but is also creative director for the Spanish label Loewe—played with proportion, fabric and print in his newest collections. At JW Anderson, there were patterns and shapes that we’ve seen before in his womenswear offerings; a recurring paisley motif was notably splashed across a voluminous coat with a handkerchief hemline. A dramatic effect, and one decidedly more ‘feminine’ than the typical puffer coats men have long been relegated to choosing for their closets. Loewe’s show raised the idea of updated androgyny to glamorous heights, with shimmering flouncy dresses and an op-art printed caped coat cropping up as if to say, “Forget what you know about who can wear what.”

Some of Louis Vuitton’s pieces were realized in hits of fluorescent pink. Perhaps it’s trite to call on a colour’s gender signalling in 2020, but when you factor in another of designer Virgil Abloh’s ideas for the season—a trail of ruffles festooning a few tailored pieces—it all amounts to a clear call: End generalizations around what makes something wearable for a particular gender.

Palomo Spain, a line that launched in 2015 and has achieved break out status thanks to its gender non-conformity when it comes to fabrications and silhouettes, carried on with its philosophy that brocade and lace aren’t textiles exclusive to a certain gender’s clothing. A trailblazer in this movement towards detail-specific gender neutrality, the brand’s pieces recall grand courts of a long-dead king. (Just add the powdered wig.)

On that note, men have worn opulent fabrics, hues like pink and high heels throughout the ages. It begs the question: Why do these aspects of design have any novelty at all in this era of clarity around gender conventions? Much of it, as it was in Louis XIV’s day, is a matter of access. Despite how much the fashion industry works towards being more diverse and inclusive, Dr. Barry points out that when you look at who’s wearing these pieces on the runway, they’re not your average consumer.

“I question which men are given permission to wear styles that confront narrow masculine boundaries,” he notes. “The expansion of men’s clothing has not been reflected in the bodies of men who model them. We continue to see primarily lean, tall, young, white, cis-gender and non-disabled men on the runways in these styles. While these men are given the permission and confidence to play with feminine styles, fat and disabled men are further marginalized; they’re not only excluded from fashion in general but from dressing in these fashionable feminized menswear styles.”

After adding this exclusivity to the price points of high-end designer pieces, its fair to say that ushering in a time when men will sport bows, ruffles and maxi dresses depends entirely on these pieces leaving the runway and finding a place in every day life. “Before we see most men go out to buy and wear a dress, more men with the privilege—starting with those of us in fashion—need to wear these feminine pieces outside of fashion events and in our everyday lives where these outfits are uncommon, such walking our dogs in the park or going grocery shopping,” says Dr. Barry. “Dressing our bodies in clothes associated with femininity within spaces where these outfits are not the norm will help unsettle assumptions and inspire unspoken conversations about masculinity. The goal isn’t for all men to dress in more feminine styles, but rather to make the world a safe place for those who do.”

Photograph courtesty of Imaxtree
Get the best of FASHION in your inbox Thanks for signing up!
The latest fashion, beauty and celeb news delivered right to your email #FASHIONforall Now, check your inbox to complete your subscription
We won’t ever use your email address for anything else
Want even more FASHION? Follow us on social media.