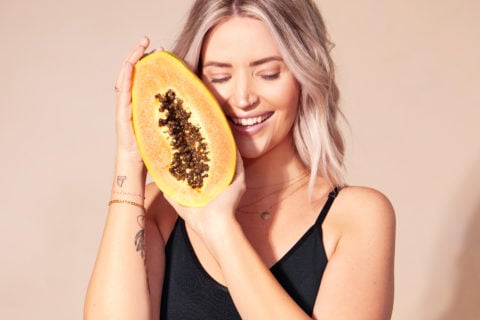 The Knix and The Birds Papaya Leggings Are Being Restocked

You're going to want to move quickly if you want to snap a pair up for yourself — they sold out in just 27 minutes the first time around.

This article was originally published in October 2020.

Update: The Papaya Box sold out in just 27 minutes (!) last fall, making it the fastest-selling product in Knix history. One of the most coveted pieces in the box, The Papaya Legging, is being restocked on February 20, 2021. The Papaya High Rise Legging, $90, comes in Black and Titanium and is available in sizes XS through XXXL. Run, don’t walk.

Last week, Canadian intimates brand Knix – which recently launched its newest range of Leakproof underwear – announced that it was teaming up with Sarah Landry of The Birds Papaya on a limited edition collection of custom items. The Papaya Box will launch on October 18 and has already garnered a waitlist of more than 30,000 people.

Taking to social media to announce the partnership, the brand revealed that the collab has been two years in the making. As for what you’ll get in The Papaya Box? Most excitingly, the box includes Knix’s first ever pair of leggings. Called the Papaya High-Rise Legging, the leggings “offer a smooth, sleek silhouette that hugs the body” according to a release and are finished in a high shine, leather-look foil print. The box also includes a pair of Knix’s high-rise thong in an exclusive print, and the longevity bra. There’s also a selection of products from other brands, too, hand-picked by Landry for inclusion including earrings from TISH Jewelry and sustainable drink labels from NOMI+SIBS – both of which are women-led Canadian brands.

The collab isn’t the first time Knix and Landry have worked together. In 2017, Knix founder and CEO Joanna Griffiths asked Landry to be shot for a Knix campaign in 2018 after spotting a photo of her on Instagram. From there, the relationship continued to blossom with Landry joining Knix as a consultant as she simultaneously built The Birds Papaya.

The box will be available in sizes S-XXXL and is $150. You can sign up to be added to the waitlist here and be notified when it launches.