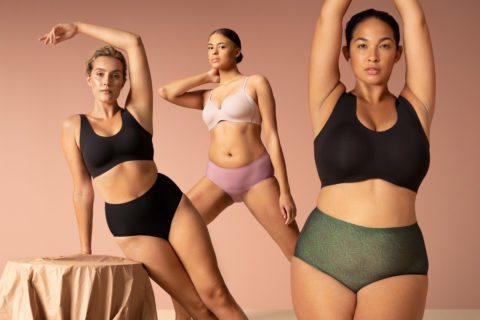 Today, Canadian intimates brand Knix is launching its newest product innovation in the form of Super Leakproof Underwear. In fact, they’re so good that they completely eliminate the need for disposable products, absorbing the equivalent of eight tampons worth of fluid.

According to research done by the brand, the average person spends 2,535 days – or seven years (!) – on their period, using roughly 5,000 to 15,000 (the equivalent to roughly 300 pounds) of disposable period products during that time. The idea behind the Super Leakproof line is for it to replace the need for these single-use products and therefore save huge amounts of period-related waste from ending up in landfills across the world.

Brand founder Joanna Griffiths tells us that the brand’s Leakproof line has been the focus of constant innovation since its launch seven years ago, culminating in this newest innovation which hits shelves today. Plus, she says the category has come a long way since the brand first launched it back in 2013. “It’s been a wild ride to be honest with you. When I first launched the brand back in 2013, it was really a net new product for the category and no one really knew what it was or what to do with it. It was really hard to find manufacturing partners –everyone kind of scratched their heads at you, like what do you mean? You’re going to do what? (laughs). People just had so many questions about how the product worked.” She continues, “I think that over the past three years we’ve seen a huge shift where there’s so much curiosity and interest around this product line. I think the world has come a really long way in a short period of time in terms of destigmatizing periods and making it less of a taboo topic. It’s the same around leaks that can happen – one in three women leak when they laugh, sneeze or do a jumping jack – I think that conversations that used to be happening in private chatrooms are now making their way into Instagram feeds and the comments section. It’s been really exciting to see that evolution.”

And the numbers are there to back it up. “This is a category that didn’t exist seven years ago when we launched and by 2023 it’s projected to be a $500 million category. It’s actually one of the fastest growing categories in the world,” Griffiths tells us, likening the product to kombucha or Greek yoghurt which went from being localized products to everywhere in the mainstream.

The collection includes five styles – the High Rise, Bikini, Cheeky, Boyshort and Thong – available in an array of sizes (up to an XXXL) and colours, including a limited edition green leaf print which “plays off the top layer of the underwear which actually uses seaweed fibre which is naturally bacteriostatic and quick-drying,” says Griffiths. All styles feature moisture-wicking anti-odor carbon cotton, polyester moisture-lock protection, a leak-resistant exterior for superior absorption, as well as a multi-layer, ultra lightweight and super absorbent extended gusset with full coverage from front to back.

Plus, the brand will be launching kits for the first time in its Leakproof line, categorized by light, medium or high absorbency. All you need to do is pick the kit that’s right for you and you’ll receive five pairs of underwear (four from either the Leakproof or Super Leakproof line, or a mix depending on the kit you choose, and the brand’s Dream Short).

If you’re new to the product and wondering how they’ll fit in with your life and regular laundry cycle, fear not. “You’re going to wear them exactly as you would normal underwear – it’s on the outside of your body so it’s not like a tampon where there’s a time limit,” explains Griffiths. “You can throw it directly into the washing machine with dark colours or you can rinse them beforehand – it’s totally up to you, you can do either. I think it depends on how quickly you’re going to do laundry. And then you lay it flat to dry.”

This category also presents an opportunity for the brand to continue to broaden its message of inclusivity, particularly as products in the Leakproof and Super Leakproof lines allow people who menstruate the freedom to do so whilst feeling safe and protected. Griffiths agrees, pointing to the Dream Short as the brand’s gender neutral style adding that the brand is “absolutely making that transition” to be more inclusive across the entire brand. “Everything from our mission statement to the way we talk about the products, we’re removing the reliance on using women and to change the language that we’re using around people who menstruate, not just women.”

The new Super Leakproof line from Knix is available online and in-stores from today.