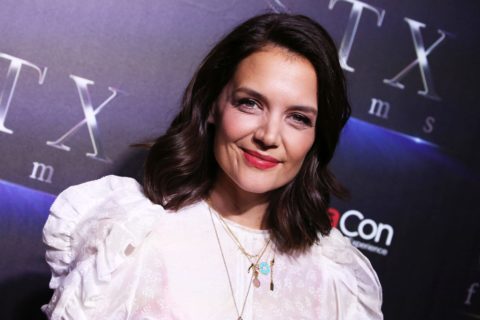 This just in: Katie Holmes is officially a bra influencer. Who knew?

Earlier this week the former Dawson’s Creek star stepped out in New York City to hail a cab wearing a chunky cashmere cardigan and matching bra. What at first appeared to a wardrobe malfunction was actually just a deliberate (and stellar) combination. Looking supremely chic for such a routine errand, Holmes quickly captured the attention of fashionophiles on the internet who praised the actress for her style. She paired the pieces with skinny blue jeans (in the perfect blue wash, we might add), black low-heeled sandals and oversized sunglasses.

@katieholmes212 out in NYC in KHAITE CASHMERE yesterday.

And it turns out so many people loved the look that part of it sold out in an hour of being identified. The bra/cardigan combo (or bradigan, if you will – apparently it’s a thing) is the work of American label Khaite. The brand confirmed to The Cut that the “Eda” bra was the sell-out piece (it retails for $690), and that it was teamed with the “Scarlet” cardigan (which retails for $2,045). The latter is still available to purchase, although given that the temperatures are already dropping across North America we suspect it won’t be for long.

Speaking to the site about the bra, Khaite’s founder and creative director, Catherine Holstein, said, “I have been making cashmere bras for two years now and really believed that people would catch on eventually. Thank you Katie!” She also added that although the style looks small there is plenty of stretch in the material to support various cup sizes.

Holmes was reportedly introduced to the brand via her stylist Jeanne Yang, and bought the set herself.

Photo by Matt Baron/Shutterstock
Get the best of FASHION in your inbox Thanks for signing up!
The latest fashion, beauty and celeb news delivered right to your email #FASHIONforall Now, check your inbox to complete your subscription
We won’t ever use your email address for anything else
Want even more FASHION? Follow us on social media.