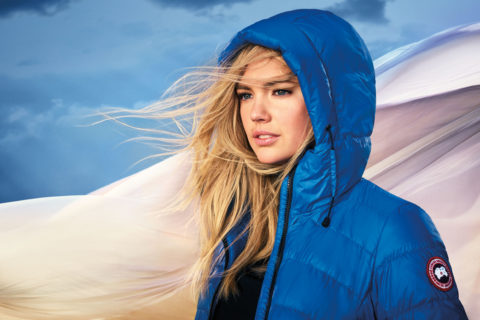 “Polar bears are the messengers of climate threats we all face,” says Upton.

Model and actress Kate Upton is no stranger to statement-making imagery. One of her most iconic shots is the cover of Sports Illustrated’s 2013 swimsuit issue. Standing amid icebergs on a boat in Antarctica, Upton wears bikini bottoms and an item of clothing not often seen on a swimwear-themed cover: a Canada Goose parka. Seven years after discovering the outerwear brand on the set of that shoot, Upton is its newest ambassador.

As a “Goose Person,” she has been brought on board to raise awareness about the future of Arctic polar bears in a world ravaged by climate change. Partnering with
Polar Bears International (PBI), the only organization focused solely on wild polar bear conservation, Canada Goose has created a special PBI collection of rainwear, windwear and lightweight down jackets for the Spring 2020 season, with $50 from the sale of each product going toward polar bear and en­vironmental research.

Upton, who stars in the collection’s campaign, travelled to Churchill, Man., to visit the local PBI outpost and see the organization’s work first-hand. For the self-proclaimed “animal lover” and champion equestrian (she competed at the national level when she was a teen), this partnership seems like an organic fit. “Conservation has always been important to me and even more now that I’m a mother,” says the model, who gave birth to her first child in 2018. “I think about the world and our environment in a completely different way. I think about the legacy I’ll be leaving for generations to come and the kind of world I want Genevieve to grow up in.”

On her visit to Churchill, Upton spotted a polar bear within minutes of her arrival, en route from the airport to the hotel. That may seem like good fortune, but she’s quick to note that it’s actually the opposite. “He was adorable, but, unfortunately, seeing him there was not a good sign,” she says. “The bears roam closer to town because they are hungry and can’t go out to hunt yet because there isn’t enough ice.”

Through this experience, Upton says she’s learned that sea ice is integral to not only the bears’ survival but the planet’s. “Polar bears are the messengers of climate threats we all face,” she says. “They need sea ice as a platform to hunt on, and people around the world need sea ice to help keep our planet at a stable temperature…so what happens in the Arctic doesn’t stay in the Arctic.” She’s also quick to rattle off worrying stats about the bears’ plight: “There are 19 different polar bear populations across the Arctic, with 19 different stories,” she says. “Churchill’s polar bears are one of the most threatened. The number of polar bears in this population has declined by about 30 per cent since 1987—a drop that is directly related to longer ice-free seasons on Hudson Bay.”

With a team that included PBI chief scientist Steven C. Amstrup, Upton explored the Arctic tundra around Churchill both on the ground in a state-of-the-art Tundra Buggy and in the air via a helicopter ride that led to some prime bear spotting. “I even saw a mama bear and her cub!” says Upton. “To be able to visit such a remote place and see them in their natural habitat is something I hope everyone can experience at least once in their lives.”

Image courtesy of Canada Goose
Get the best of FASHION in your inbox Thanks for signing up!
The latest fashion, beauty and celeb news delivered right to your email #FASHIONforall Now, check your inbox to complete your subscription
We won’t ever use your email address for anything else
Want even more FASHION? Follow us on social media.