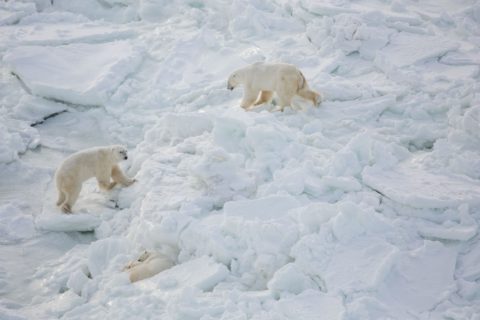 I Travelled to Churchill, Manitoba to Hang Out With Polar Bears

For many, the term ‘polar bear’ is synonymous with ‘Canada.’ Embarrassingly, I (a Canadian), had no idea that the largest congregation of polar bears in the world occurs near Churchill, Manitoba.

Last November I travelled to Churchill to meet with Krista Wright, executive director of Polar Bears International (PBI), for a two-day expedition through the Canadian Arctic. PBI is an organization dedicated to protecting polar bears by conserving their sea ice habitat, and in a rapidly changing environment their work is more important than ever.

“We really need to get to work and we need to do that collectively,” says Wright.

During the trip, we spend our time roving the tundra and the skies above, in search of polar bears. Although we spotted a fair number due to good conditions on the Hudson Bay, this isn’t always the case. Wright explains that every year the climate varies, which in turn affects polar bears. “[The climate isn’t on] a downward spiral from year to year,” she says. “Last year, the sea ice didn’t even freeze up until almost the end of December,” she explains, adding that historically the freeze-up in Churchill would have been mid-November.

On our first of two expeditions we travelled in Buggy One, PBI’s main research vehicle. It’s equipped with everything, from a camera to livestream polar bear sightings, a reliable internet connection and most importantly an electric heater. “One day we were out and it was negative 50 degrees,” Wright recalls. “With the wind-chill even being colder than that, I think it was something like negative 70. It was maybe the coldest I’ve ever been.”

Though at first glance PBI’s work may seem hyperlocal, Wright is quick to point out that the changes in the Arctic have global repercussions. “We have to realize that if we save polar bears we’ll also save lots of other things on the planet.” So what can someone like myself, who lives in downtown Toronto, do to help the cause? “The biggest thing [with climate change] is really talking about it and electing leaders and supporting businesses that are focused and dedicated on climate change action.”

One such business is Canada Goose. For every blue parka sold, the Canadian outerwear brand will donate money to PBI. (Fun fact: “PBI Blue” is now officially a Pantone colour). “It’s really contributed hugely to us being able to increase the number of projects that we have here in Canada.”

By the time our final expedition wraps up it’s 6 p.m. and the sunlight has run out. For me it marks the end of my trip, but also conjures up a sobering realization: Not only are the days here short, but so is the window of opportunity for climate change action. “I do believe we’re better off being hopeful than being full of despair,” Wright says. “I do believe that we can do it, but it’s not going to be done by a few, it’s going to be done by the masses and we really need to work together in order to achieve that.”

November 16, 2017. Photo by Brett Gundlock
Get the best of FASHION in your inbox Thanks for signing up!
The latest fashion, beauty and celeb news delivered right to your email #FASHIONforall Now, check your inbox to complete your subscription
We won’t ever use your email address for anything else
Want even more FASHION? Follow us on social media.