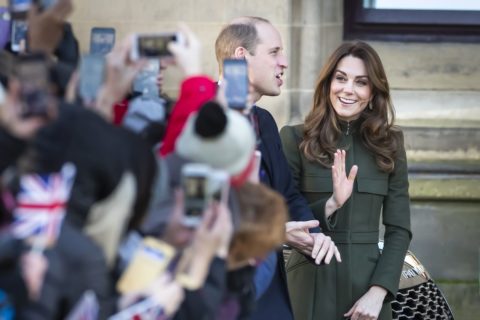 In case you were in need of any more coat inspo for the winter months.

The Duke and Duchess of Cambridge stepped out for heir first joint event of 2020 today.

The pair visited Bradford to meet with a number of organizations “which support the community and promote cohesion within it,” according to the Kensington Royal Twitter page. The visit saw them meet with students, as well as apprentices at My Lahore restaurant (where they made mango and kulfi milkshakes). They also stopped by the Khidmat Centre, which works with vulnerable members of the community, and Near Neighbours, an organization which helps to foster relationships and trust between people in the neighbourhood.

For the outing, Kate chose a military-inspired, army green coat from one of her favourite brands, Alexander McQueen. She teamed the statement piece with a croc-embossed bag from Aspinal, a checked midi dress from Zara (you can shop a similar version here), Gianvito Rossi heels and Zeen earrings. In fact, the outfit was a highlights reel of many of her go-to brands. McQueen, in particular, has been a favourite of the Duchess’ since wearing a custom wedding dress by Sarah Burton for her wedding back in 2011. Prince William also opted for cool winter hues of navy and burgundy in his ensemble.

In addition to this being the pair’s first joint engagement of the new decade, it’s also the first time they’ve attended an event together since November when they celebrated the launch of mental health text messaging support service, Shout.

The outing came amidst a week of intense royal coverage following Prince Harry and Meghan Markle’s decision to step down as senior royals. The Queen has agreed to let the pair transition out of their full-time royal responsibilities but the exact parameters of their new life are still being ironed out. It is expected that details will be released by week’s end.

Yesterday, Meghan was spotted for the first time in Canada as she visited a women’s shelter in Vancouver.