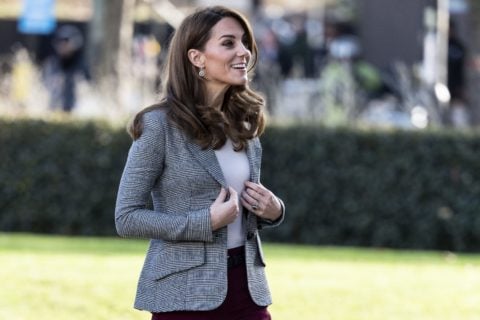 Kate was first seen in the jacket in October of last year when she visited Coach Core Essex. For today’s outing, the Duchess paired the tailored piece with a white tee, burgundy trousers from Joseph and black heels from Gianvito Rossi.

Smythe confirmed to FASHION that the style worn by the Duchess is the 2 Button Blazer in Glen Check with Black Corduroy. The style is no longer available to purchase and the brand says there are no plans to re-produce the jacket. However, you can purchase a similar style from the brand, aptly known as the Duchess Blazer.

Kate was joined by her husband Prince William for today’s event, held at the Troubadour White City Theatre in London. During the visit, the pair met with staff and volunteers, as well as mental health campaigners, working with the organization. Shout was launched in May by the Duke and Duchess of Cambridge and the Duke and Duchess of Sussex as part of their Royal Foundation. The idea behind the initiative is to provide immediate support via text to anyone struggling with mental health issues. According to a report, since its launch the charity has had around six million text messages with people in need of support.

Photo by Mark Cuthbert/UK Press via Getty Images
Get the best of FASHION in your inbox Thanks for signing up!
The latest fashion, beauty and celeb news delivered right to your email #FASHIONforall Now, check your inbox to complete your subscription
We won’t ever use your email address for anything else
Want even more FASHION? Follow us on social media.